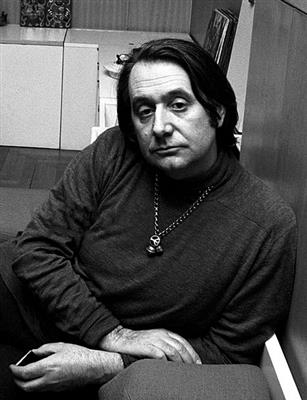 Ettore Sottsass (14 September 1917 – 31 December 2007) was an Italian architect and designer during the 20th century. His body of work included furniture, jewelry, glass, lighting, home objects and office machine design, as well as many buildings and interiors. His style was defined by bright color choices, statement pieces and decoration. Ettore Sottsass was an iconic figure in design history.


Sottsass was born in Innsbruck, Austria, and grew up in Turin, where his father, also named Ettore Sottsass, was an architect. The elder Sottsass belonged to the modernist architecture group Movimento Italiano per l'Architectura Razionale (MIAR), which was led by Giuseppe Pagano.


The younger Sottsass was educated at the Politecnico di Torino in Turin and graduated in 1939 with a degree in architecture. He served in the Italian military, in the Repubblica Sociale Italiana, and spent some of World War II in a prison and then in a labor camp in Yugoslavia.


After his time in the military, Sottsass opened his own architecture and design firm in Milan, Italy. Here he started designing furniture and experimented with different color, patterns and shapes. His work was often associated with pop culture with his brightly colored whimsical objects. His pieces were often made out of glass and ceramic.


After returning home, Ettore Sottsass worked as an architect with his father, often on new modernist versions of buildings that were destroyed during the war. In 1947, living in Milan, he set up his own architectural and industrial design studio, where he began to create work in a variety of different media: ceramic, painting, sculpture, furniture, photography, jewelry, architecture and interior design.


In 1949 Sottsass married Fernanda Pivano, a writer, journalist, translator and critic. From 1954 to 1957 he was a member of the International Movement for an Imaginist Bauhaus, resigning due to the movement's perceived aggression and its lack of professionalism. In 1956, Sottsass traveled to New York City and began working in the office of George Nelson. He and Pivano traveled widely while working for Nelson, and returned to Italy after a few months.


Also in 1956, Sottsass was commissioned by the American entrepreneur Irving Richards on an exhibition of his ceramics.


Back in Italy in 1957, Sottsass joined Poltronova, a semi-industrial producer of contemporary furniture, as an artistic consultant. Much of the furniture he worked on there influenced the design he would create later with Memphis Milano.


In 1956, Sottsass was hired by Adriano Olivetti as a design consultant for Olivetti, to design electronic devices and develop the first Italian mainframe computer, the Elea 9003 for which he was awarded the Compasso d'Oro in 1959. He also designed office equipment, typewriters, and furniture. There Sottsass made his name as a designer who, through colour, form and styling, managed to bring office equipment into the realm of popular culture. His first typewriters, the Tekne 3 and the Praxis 48, were characterized by their sobriety and their angularity. With Perry A. King, Sottsass created the Valentine in 1969 which is considered today as a milestone in 20th century Design. Light, portable, which became a fashion accessory