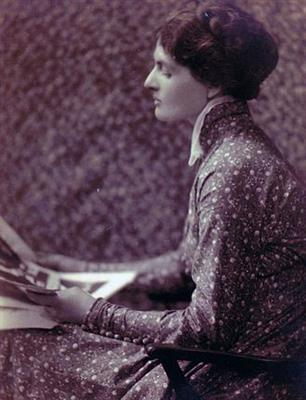 Ethel Léontine Gabain (26 March 1883 – 30 January 1950) was a French-English artist. Gabain was a renowned painter and lithographer and among the founding members of the Senefelder Club. She was the wife of the print maker John Copley and the mother of actor Peter Copley, and was also known by her married name of Ethel Copley. While she was known for her oil portraits of actresses, Gabain was one of the few artists of her time able to live on the sale of her lithographs. She also did etchings, dry-points, as well as some posters.

Gabain had four sisters and one brother. Her father was French and her mother, Bessie, was born in Scotland. Her father, Charles Edward Gabain was a well off French coffee importer and on his retirement he moved the family to England to The Manor House, Bushey, Hertfordshire. Gabain was born in France and lived there for over twenty years. When she moved to England she was well equipped. She knew the country and was able to speak fluent English due to the fact, from the age of fourteen, she had boarded at Wycombe Abbey School, Buckinghamshire. The school encouraged her art skills and commissioned her to paint a portrait of Miss Ann Watt Whitelaw, who was the headmistress there from 1911-1925.

In 1902, Gabain studied at the Slade School of Fine Art before returning to France in 1903 to study at Raphael Collin's Studio in Paris. From 1904 to 1906 she studied at the Central School of Arts and Crafts in London. There, the artist, F. E. Jackson, taught Gabain the art of lithography. The Central, which was established in 1896 by the London County Council, offered instruction in the trades which were thought to be more artistic – lithography being one of them. Gabain was determined to produce her own lithographic prints and also enrolled at the Chelsea Polytechnic for a time. Here she learnt how to use a printing press. Gabain experimented with colour lithography and decided it was not how she wanted to work so she sought to produce brilliant rich black and white lithographs.

In 1910, Gabain and her future husband John Copley, along with A.S Hartrick and Joseph Pennell, were among the founding members of the Senefelder Club. When the Club held its first exhibition at the Goupil Gallery in January that year, six lithographs by Gabain were included. In 1927 the club’s members exhibited at the Modern British Engravings Exhibition – held in the Pavilion de Marsan, a wing of the Louvre. In 1929 she featured in the British Art exhibition in Sweden.

Gabain and Copley married in 1913 and they lived in Kent for a time at The Yews in Longfield. Whilst here she adopted a small remarque in the shape of a yew tree in the lower margin of her prints. She also used images of the pergolas and the sundial at their home. The couple and their two sons, Peter and Christopher, moved to 10 Hampstead Square, NW3, where Gabain had her studio on the top floor and Copley had a press which they used to work together. In 1925 Copley was so ill it was decided that the family should leave England and live in Alassio, Italy. During the two and a half years they were there, Gabain painted the landscape and gave art classes and public lectures at the Alassio English School.