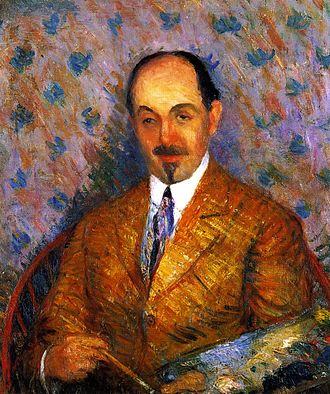 Ernest Lawson (March 22, 1873 – December 18, 1939) was a Canadian-American painter and a member of The Eight, a group of artists who formed a loose association in 1908 to protest the narrowness of taste and restrictive exhibition policies of the conservative, powerful National Academy of Design. Though Lawson was primarily a landscape painter, he also painted a small number of realistic urban scenes. His painting style is heavily influenced by the art of John Henry Twachtman, J. Alden Weir, and Alfred Sisley. Though considered an American Impressionist, Lawson falls stylistically between Impressionism and realism.


Ernest Lawson was born in 1873 in Halifax, Nova Scotia to a prominent family, and arrived in the United States in 1888 and settled in Kansas City. In 1891, he went to live in New York and enrolled in classes at the Art Students League, studying under John Twachtman, who introduced him to Impressionism and was the central influence of his formative years. He later continued to study with Twachtman and with J. Alden Weir at their Cos Cob, Connecticut summer art school in the 1890s. "To some degree," one art historian has noted, "Lawson was a product of the art colony movement." Lawson visited France in 1893 and studied at the Académie Julian with Jean-Joseph Benjamin-Constant and Jean-Paul Laurens. He practiced plein air painting in southern France and at Moret-sur-Loing, where he met the English Impressionist Alfred Sisley. In 1894, Lawson exhibited two paintings in the Salon. Lawson shared a Paris studio that year with W. Somerset Maugham, who is believed to have used Lawson as the inspiration for the character "Frederick Lawson" in his 1915 novel Of Human Bondage Back in the United States, he married his former art teacher, Ella Holman.


Upon his return to the United States in 1896, Lawson began developing his own aesthetic. He was further encouraged by Robert Henri, William Glackens, and the other independent artists with whom he began to associate around 1903. Lawson moved to Washington Heights in Upper Manhattan in 1898, and his work for the next two decades focused on subjects—Fort Tryon Park, the Harlem River, Spuyten Duyvil, the fields, bridges, docked boats, tree-covered hills, and rocky inclines at the edge of a city on the move—from that still-unpopulated part of the metropolis. His paintings form a "procession of lonely vistas devoid of people," but are filled with an almost tactile sense of paint and an understated chromatic brilliance. (Art critic James Gibbons Huneker, a great admirer of Lawson, referred to his friend's skill as originating in a "palette of crushed jewels.") Like other realists, he worked on-site and traveled with some frequency in search of interesting new subjects; his search for the picturesque took him to Spain, New Hampshire, Nova Scotia, Kansas, Colorado, Tennessee, New Mexico, Connecticut, and Florida. Lawson had his first solo exhibition at the Pennsylvania Academy of the Fine Arts in 1907 and won a prize in the Academy's Annual for a winter landscape, the theme of which became his single most identifiable subject. The following year, he joined the rebellious group that would become known as "The Eight," whose members included Robert Henri, William Glackens, John Sloan, George Luks, Everett Shinn, Arthur B. Davies and Maurice Prendergast.