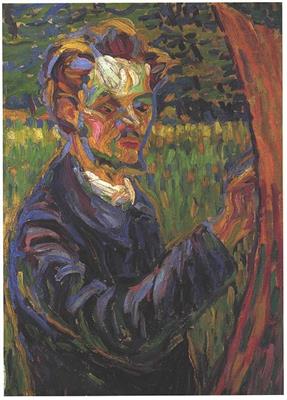 
Heckel was born in Döbeln, Saxony, the son of a railway engineer. Between 1897 and 1904 he attended the Realgymnasium in Chemnitz, before studying architecture in Dresden. He left after three terms, shortly after the foundation of Die Brücke, an artists' group of which he was secretary and treasurer. The other founder-members, also architectural students, were Ernst Ludwig Kirchner, Karl Schmidt-Rotluff and Fritz Bleyl. He worked in the office of the architect Wilhelm Kreis until July 1907, when he resigned to become a full-time artist.


Heckel met the other founding members of Die Brücke, Ernst Ludwig Kirchner, Karl Schmidt-Rotluff, and Fritz Bleyl, while studying architecture in Dresden. The foursome equally regarded pursuing a degree in architecture as a compromise with their respectable middle-class parents who would have never supported them, had they wanted to study art.
Heckel attended the Dresden Polytechnic Institute for only eighteen months, after which time he accepted a job as a draughtsman at Wilhem Kreis's architectural studio. He was able to use the position for the benefit of the Brücke. When the firm was asked to design an exhibition room for the lamp manufacturer Max Seifert, Heckel was able to persuade the industrialist that it was worthwhile giving wall space and displays to the Brucke for an exhibition.


As a member of Die Brücke, Heckel often filled the role of business manager, which allowed the collective to network with other upcoming artists at the time, such as the Munich-based Franz Marc. This subsequently led to greater publicity for the collective, such as their mention in the almanac of Franz Marc's own artistic coalition, the Blaue Reiter.


It is worthwhile to note that with the exception of one favorable review by Paul Fetcher in the leading Dresden newspaper Dresdner Neueste Nachrichten, the exhibition in Löbtau at the factory of the lamp manufacturer Max Seifert was considered to be a flop. In addition, Heckel's poster, no longer extant, had been barred from public display by the Dresden police.
In 1906 and 1907 the Die Brücke had another exhibition in Löbtau, devoted exclusively to graphics and including a group of woodcuts by Wassily Kandinsky. Unfortunately, the group once again failed to strike a chord with the public.
However, much more noteworthy and ironically also notorious, were the next three annual shows by the Die Brücke, this time held in the fashionable Emil Richter Gallery. In large, silent rooms, expensively furnished and smothered with lush carpets, the group's unconventional paintings and prints struck a foreseeably strident chord, amongst them notably a nude poster of a woman that ruffled many a complacent Dresdener.


Heckel and other members of Die Brücke greatly admired the work of Edvard Munch, and aimed to make a "bridge" between traditional neo-romantic German painting and modern expressionist painting. The four founding members made much use of the print as a cheap and quick medium with which to produce affordable art.