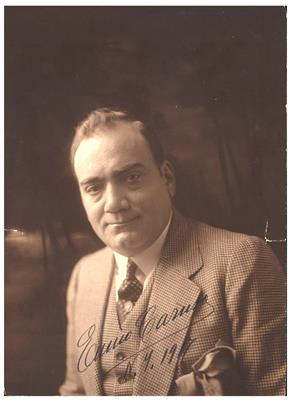 Enrico Caruso (Italian pronunciation: [enˈriːko kaˈruːzo]; 25 February 1873 – 2 August 1921) was an Italian operatic tenor. He sang to great acclaim at the major opera houses of Europe and the Americas, appearing in a wide variety of roles from the Italian and French repertoires that ranged from the lyric to the dramatic. Caruso also made approximately 260 commercially released recordings from 1902 to 1920. All of these recordings, which span most of his stage career, remain available today on CDs and as downloads and digital streams.

Enrico Caruso came from a poor but not destitute background. Born in Naples in the Via San Giovannello agli Ottocalli 7 on 25 February 1873, he was baptised the next day in the adjacent Church of San Giovanni e Paolo. His parents originally came from Piedimonte d'Alife in the Province of Benevento (now called Piedimonte Matese), in the Province of Caserta in Campania, Southern Italy. Called Errico in accordance with the Neapolitan language, he would later adopt the formal Italian version of his given name, Enrico ("Henry" in English). This change came at the suggestion of his singing teacher Guglielmo Vergine.

Caruso was the third of seven children and one of only three to survive infancy. There is a story of Caruso's parents having had 21 children, 18 of whom died in infancy. However, on the basis of genealogical research (amongst others conducted by Caruso family friend Guido D'Onofrio), biographers Pierre Key, Francis Robinson, and Enrico Caruso Jr. and Andrew Farkas, have proven this to be an urban legend. Caruso himself and his brother Giovanni may have been the source of the exaggerated number. Caruso's widow Dorothy also included the story in a memoir that she wrote about her husband. She quotes the tenor, speaking of his mother, Anna Caruso (née Baldini): "She had twenty-one children. Twenty boys and one girl – too many. I am number nineteen boy."

Caruso's father, Marcellino, was a mechanic and foundry worker. Initially, Marcellino thought his son should adopt the same trade, and at the age of 11, the boy was apprenticed to a mechanical engineer who constructed public water fountains. (Whenever visiting Naples in future years, Caruso liked to point out a fountain that he had helped to install.) Caruso later worked alongside his father at the Meuricoffre factory in Naples. At his mother's insistence, he also attended school for a time, receiving a basic education under the tutelage of a local priest. He learned to write in a handsome script and studied technical draftsmanship. During this period he sang in his church choir, and his voice showed enough promise for him to contemplate a possible career in music.

Caruso was encouraged in his early musical ambitions by his mother, who died in 1888. To raise cash for his family, he found work as a street singer in Naples and performed at cafes and soirees. Aged 18, he used the fees he had earned by singing at an Italian resort to buy his first pair of new shoes. His progress as a paid entertainer was interrupted, however, by 45 days of compulsory military service. He completed this in 1894, resuming his voice lessons upon discharge from the army.