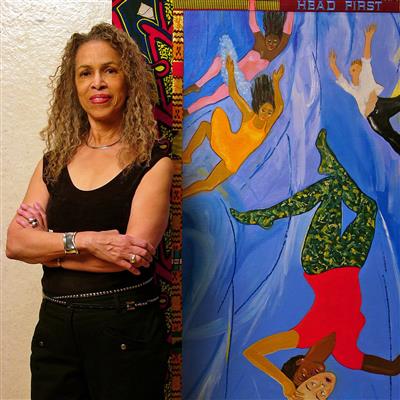 
Amos was born in Atlanta, Georgia in 1937 to India DeLaine Amos and Miles Green Amos. Amos took an interest in art at an early age, creating "masses of paper dolls" and learning figure drawing from issues of Esquire and the art of Alberto Vargas, was painting the figure by the age of nine. Her mother had aspirations of Amos studying with Hale Woodruff, but he did not accept many private students and left the area before she had the opportunity to study with him.


At eleven, Amos took a course at Morris Brown College, where she worked on her draftsmanship and took note of the work that African American college students were producing at the time.
By high school, Amos was submitting her work to Atlanta University art shows. She graduated from Booker T. Washington High School in Atlanta at the age of 16, and applied to Antioch College, because of their progressive policies.


Her father exposed her to black intelligentsia; Zora Neale Hurston frequently visited and W.E.B. Du Bois once called on the family.


Amos studied at Antioch College in Yellow Springs, Ohio, at the Central School of Art and Design in London and at New York University. While at Antioch, Amos worked for half of the year, and studied for the remainder. She worked in Chicago, New York, and in Washington, D.C., which enabled her to visit galleries and museums, which had been less accessible in Atlanta. Her fourth year at Antioch, she went to England and studied at the London Central School of Art, where she learned to print and etch under Anthony Harrison, and began to paint with oils, which she had not done before. Amos received her BFA degree from Antioch in 1958, then went back to London for her degree in etching, which she received in 1959 after two years of study. The following year Amos moved to New York City to start working with two printmaking studios. Later on she received her MA at New York University (NYU).


Amos moved to New York City after feeling stunted by the slow move of the Atlanta art scene. Amos was not expecting the level of racism, sexism, and ageism that she encountered upon moving to New York. Galleries would not accept her under the premise that she was too young to show, and studio teaching jobs rejected her on the grounds that, "We're not hiring right now". Amos was told by both Cooper Union and the Art Students League that they were not hiring after she applied for a teaching position. The difficulty of entering work into galleries led her to teach as an assistant at the Dalton School where she met artists and was introduced to the New York and East Hampton art scene, where she experienced difficulty showing her work in a "man’s scene." It was also around this time that Emma Amos began her career as a textile designer, working for the weaver and colorist Dorothy Liebes, where her designs were translated into unique carpets.