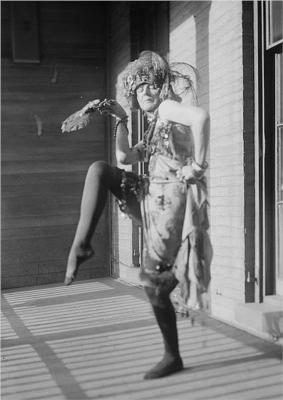 Her provocative poetry was published posthumously in 2011 in Body Sweats: The Uncensored Writings of Elsa von Freytag-Loringhoven. The New York Times praised the book as one of the notable art books of 2011.

Elsa Plötz was born in Swinemünde in Pomerania, Germany, to Adolf Plötz, a mason, and Ida Marie Kleist. Her relationship with her father was temperamental—she emphasized how controlling he was in the family, as well as how cruel, yet big-hearted he was. She related the ways that political structures promote masculine authority figures in family settings, functioning as a means of maintaining the state's patriarchal societal order of which even the patriarch is submissive to, to her father’s behavior. Her discontent with her father’s hegemonic masculine control may have fostered her anti-patriarchal activist approach to life. On the other hand, the relationship that she had with her mother was full of admiration--her mother’s craft involving the repurposing of found objects could have spawned Freytag-Loringhoven’s utilization of street debris/found objects in her own artworks. She trained and worked as an actress and vaudeville performer and had numerous affairs with artists in Berlin, Munich and Italy. She studied art in Dachau, near Munich.

She married Berlin-based architect August Endell in a civil service on August 22, 1901 in Berlin, becoming Elsa Endell. They had an "open relationship", and in 1902 she became romantically involved with a friend of Endell's, the minor poet and translator Felix Paul Greve (who later went by the name Frederick Philip Grove). After the trio travelled together to Palermo, Sicily in late January 1903, the Endells' marriage disintegrated. and they divorced in 1906. Although their separation was acrimonious, she dedicated several satirical poems to Endell. In 1906, she and Greve returned to Berlin, where they were married on August 22, 1907.

By 1909, Greve was in deep financial trouble. With his wife's help, he staged a suicide and departed for North America in late July 1909. In July 1910, Else joined him in the United States, where they operated a small farm in Sparta, Kentucky, not far from Cincinnati. Greve suddenly deserted her in 1911 and went west to a bonanza farm near Fargo, North Dakota, and to Manitoba in 1912. There are no records of a divorce from Greve. She started modeling for artists in Cincinnati, and made her way east via West Virginia and Philadelphia, before she married her third husband, the German Baron Leopold von Freytag-Loringhoven (son of Hugo von Freytag-Loringhoven), in November 1913 in New York. There, she became known as "the dadaist Baroness Elsa von Freytag-Loringhoven".

In New York City, Freytag-Loringhoven supported herself by working in a cigarette factory and by posing as a model for artists such as Louis Bouché, George Biddle, and Man Ray. She also appeared in works by Man Ray, George Grantham Bain and others; lithography by George Biddle; and paintings by Theresa Bernstein.