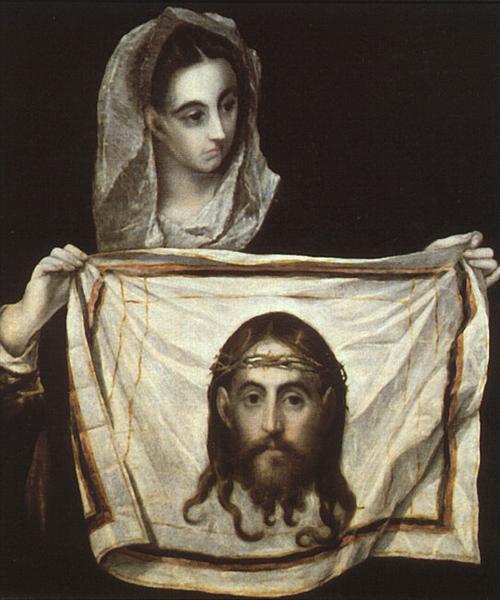 St. Veronica with the Holy Shroud

Saint Veronica was a woman of Jerusalem in the first century AD, according to Catholic tradition. A celebrated saint in many pious Christian countries, the Acta Sanctorum published by the Bollandists listed her feast under July 12, but the German Jesuit scholar Joseph Braun cited her commemoration in Festi Marianni on 13 January.

According to Church tradition, Veronica was moved with sympathy when she saw Jesus carrying his cross to Golgotha and gave him her veil that he might wipe his forehead. Jesus accepted the offering, held it to his face, and then handed it back to her—the image of his face miraculously impressed upon it. This piece of cloth became known as the Veil of Veronica.

The name "Veronica" itself is a Latinisation of Berenice (Greek: Βερενίκη, Berenikē, with a secondary form Beronike), a Macedonian name, meaning "bearer of victory". The woman who offered her veil to Jesus was known by this name in the Byzantine East, but in the Latin West the name took a life of its own. As proven by a medieval text, "Veronica" was used by the 13th century as a designation for a relic venerated in Rome as the true image of Jesus. Since the Latin word for "true" or "authentic" happens to be vera, the theory emerged that the name itself is derived from the Latin phrase "true image", vera icon (one Latin word for image is icon, derived from Greek: εικόνα, eikona). In the 13th-century text and also in some later sources the term Veronica was used for the veil, not the person, but for centuries it has been better known as the name of the woman. The claim that the name Veronica is derived from vera icon proved to be very persistent and we encounter it until today. The Encyclopædia Britannica says this about the legend:

The Catholic Encyclopaedia of 1913 had this to say about the growth of the legend (translations in italics added):

The reference to Abgar is related to a similar legend in the Eastern Church, the Image of Edessa or Mandylion.

There is no reference to the story of St Veronica and her veil in the canonical Gospels. She is known as the woman who wiped Jesus's face with her veil. Then the image of Jesus's face appeared on it. The closest is the miracle of the woman who was healed by touching the hem of Jesus’s garment (Luke 8:43–48); her name is later identified as Veronica by the apocryphal "Acts of Pilate". The story was later elaborated in the 11th century by adding that Christ gave her a portrait of himself on a cloth, with which she later cured the Emperor Tiberius. The linking of this with the bearing of the cross in the Passion, and the miraculous appearance of the image only occurs around 1380, in the internationally popular book Meditations on the life of Christ. The story of Veronica is celebrated in the sixth Station of the Cross in many Anglican, Catholic, Lutheran, Methodist and Western Orthodox churches.

According to the Catholic Encyclopedia, the name "Veronica" comes from the Latin vera, meaning "true" or "Truthful", and the Greek eikon, meaning "image"; the Veil of Veronica was therefore largely regarded in medieval times as the "true image", the truthful representation of Jesus, preceding the Shroud of Turin.