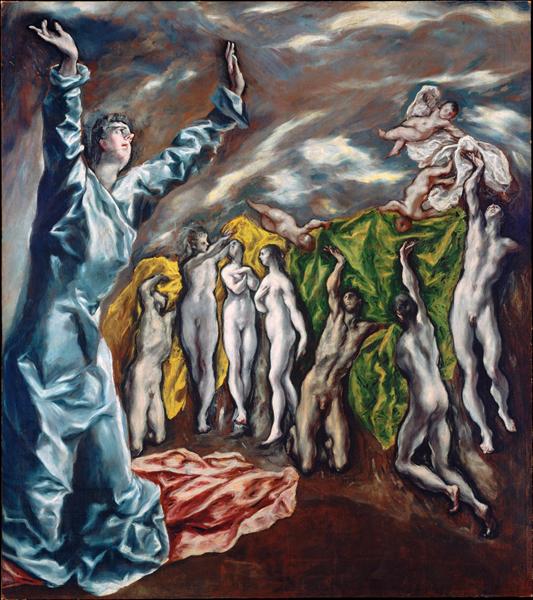 The painting, unfinished at El Greco's death and listed in a postmortem inventory, depicts a passage in Revelation (6:9–11) describing the opening of the Fifth Seal and the distribution of white robes to "those who had been slain for the work of God and for the witness they had borne." It is cut down from a large altarpiece commissioned in 1608 for the church of the hospital of Saint John the Baptist in Toledo. The missing upper part may have shown the Sacrificial Lamb opening the Fifth Seal.

The broad open brushwork is characteristic of El Greco's late style. The picture is much damaged. Much admired by twentieth-century artists, the picture was studied in Paris by Picasso when he was working on "Les Demoiselles d'Avignon" and it was sketched by Jackson Pollock.

The Opening of the Fifth Seal (or The Fifth Seal of the Apocalypse or The Vision of Saint John) was painted in the last years of El Greco's life for a side-altar of the church of Saint John the Baptist outside the walls of Toledo. Before 1908 El Greco's painting was referred to as Profane Love. Cossio had doubts about the title and suggested the Opening of the Fifth Seal. The Metropolitan Museum, where the painting is kept, comments: "the picture is unfinished and much damaged and abraded."

The very subject is taken from the Book of Revelation (6:9–11), where the souls of persecuted martyrs cry out to God for justice upon their persecutors on Earth. The ecstatic figure of St. John dominates the canvas, while behind him naked souls writhe in a chaotic storm of emotion as they receive white robes of salvation.

The upper portion of the canvas appears to have been considerably cut down (it was destroyed in 1880). This lost upper portion may have resembled that of another altarpiece, the Concert of Angels, painted by El Greco for the same church, and also cut off. Many believed that the bottom section, which has been preserved, depicted profane love, while the missing upper part depicted divine love.

In the 19th century, the painting was owned by Antonio Cánovas del Castillo, Prime Minister of Spain. Dissatisfied with the poor condition of the work, he had it "restored" around 1880. The restorers actually trimmed it by at least 175 centimetres (68.9 in), leaving John the Evangelist emphatically pointing nowhere. It was this strange quirk in composition that perhaps intrigued modern viewers the most and contributed to the painting's fame in modernist circles.

After Cánovas' death in 1897, the painting was sold for 1,000 pesetas to Ignacio Zuloaga, a painter who was instrumental in reviving European interest in El Greco. The painting may be seen in the background of his work Mis amigos, representing several notable members of the Generation of '98. Zuloaga is known to have demonstrated the painting to Pablo Picasso and Rainer Maria Rilke. He declared it as possessing a "visionary power" that made it a "precursor of modernism". In 1956, the Zuloaga Museum sold this artwork to the Metropolitan Museum of Art in New York City, where it is on exhibit today.