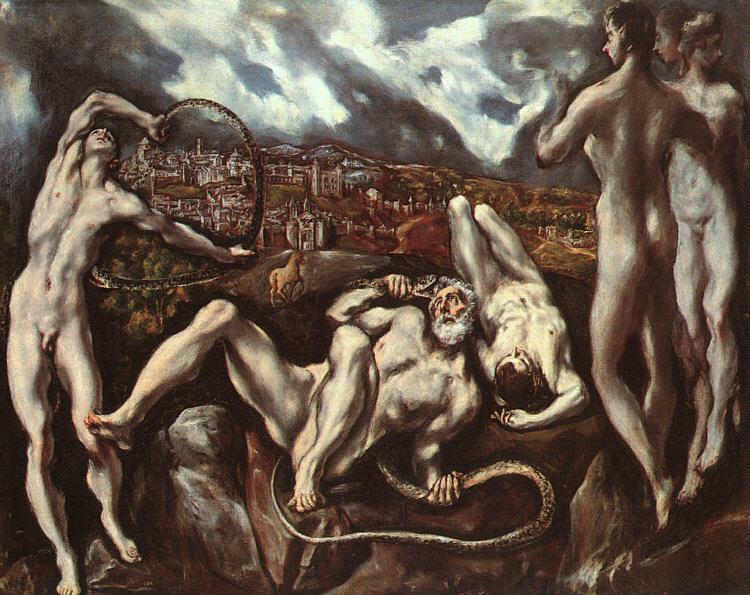 The Laocoön is an oil painting created between 1610 and 1614 by renowned Greek artist and Spanish Renaissance master Doménikos Theotokópoulos, known as El Greco ("The Greek"). It is part of a collection at the National Gallery of Art in Washington, D.C..

The painting depicts the Greek and Roman mythological story of the deaths of Laocoön, a Trojan priest of Poseidon, and his two sons Antiphantes and Thymbraeus. Laocoön and his sons were strangled by sea serpents, a punishment sent by the gods after Laocoön attempted to warn his countrymen about the Trojan horse. Although inspired by the recently discovered monumental Hellenistic sculpture Laocoön and His Sons in Rome, Laocoön is a product of Mannerism, an artistic movement originating in Italy during the 16th century that countered the artistic ideals of the Renaissance. El Greco’s painting deliberately breaks away from the balance and harmony of Renaissance art with its strong emotional atmosphere and distorted figures.

El Greco's oil painting of Laocoön represents the influence of both classical mythology and artistry.

According to Greco-Roman mythology, Laocoön was a figure in the Trojan War waged between the Achaeans (Greeks) and Trojans. Laocoön’s tale appears in many of the numerous classical texts concerning the Trojan War. In particular, Laocoön is a minor character in the Aeneid by Roman poet Virgil and the Epic Cycle, a distinct collection of Ancient Greek epic poems.

Laocoön became involved in the war after Greek soldiers, frustrated by their unsuccessful ten-year siege of the city, devised a ruse to end the war: the hollow Trojan Horse filled with Greek soldiers. Laocoön attempted to warn his compatriots that the horse was a “deadly fraud” instead of a gift, but the Trojans did not heed the warning. Believing that the war was over, the Trojans triumphantly brought the horse within their city walls and initiated a catastrophic series of events that brought about the sack of Troy.

Laocoön was killed by divine execution from the gods, who supported the Greeks in the Trojan War and sent the sea serpents as punishment. Laocoön’s death is the subject of a famous monumental Hellenistic sculpture, known as Laocoön and His Sons. The 1st-century BCE marble sculpture was created by Athenadoros, Agesander, and Polydoros of Rhodes. The Laocoön group captures a climactic moment, as Laocoön lets out an anguished yell and struggles beside his sons against Athena’s sea serpents. Unearthed in Rome in 1506, the sculpture enamored Renaissance artists with its idealized proportions and graceful, muscular figures. Laocoön and his Sons most likely served as artistic inspiration for El Greco, who would depict the subject during his “Spanish Period.”

El Greco’s version of the classical subject captures the last dying struggle of Laocoön and his sons. Laocoön, the central figure of the painting, lies down in agony on the undulating, dark rocks of the foreground. Sprawled against the foreshortened, dead body of one of his sons, Laocoön clings to life as a serpent bites his head. On the left, Laocoön’s standing son contorts in pain, writhing as a serpent swoops in towards his abdomen. Flanking the scene on the right are Apollo and Artemis, who watch the grisly scene unfold. An unfinished figure consisting only of a head and leg also appears on the right.