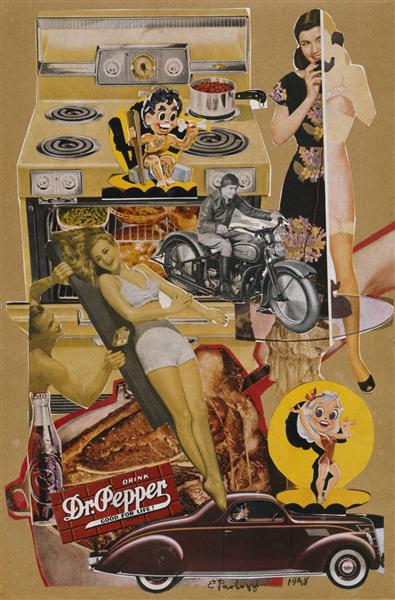 The collage is made up of images from popular American magazines, which Paolozzi procured from American ex-servicemen, many of whom were studying in Paris as a result of an initiative by the United States government known as the GI Bill. In the context of his own poverty and the general deprivation that affected all of Europe in the years immediately after the Second World War (1939-45), it is not surprising that Paolozzi was seduced by the 'exotic society, bountiful and generous' (Eduardo Paolozzi, 'Retrospective statements' in Robbins, p.192) that he saw presented in American magazines. In Dr Pepper, images of healthy, happy people enjoying the freedom afforded by such machines as cars, bikes, electric cookers and telephones overlay pictures of succulent food in abundance. When Paolozzi had left Britain in 1947 rationing was more severe than at any time during the war.

It was not, however, just the suggestion of material well-being which attracted Paolozzi to these images. He was equally struck by their artistic value and their status as the new iconography of the modern world. In his opinion, the aesthetic of American advertisements and popular magazines was one 'where the event of selling tinned pears was transformed into multi-coloured dreams, where sensuality and virility combined to form, in our view, an art form more subtle and fulfilling than the orthodox choice of either the Tate Gallery or the Royal Academy' (Eduardo Paolozzi, 'Retrospective statements' in Robbins, p.192).

Dr Pepper and similar works by Paolozzi from this period have often been cited as the forerunners of Pop Art in Britain. Although there is a clear correspondence with ideas that were later to become associated with Pop Art, Paolozzi himself was responding to Dadaism and Surrealism. Before he left Britain in 1947 he was familiar with the collages of Max Ernst (1891-1976) and Roland Penrose (1900-1984), among others, and once in Paris he had access to Mary Reynolds's and Tristan Tzara's (1896-1963) collections of Dadaist and Surrealist work. The surprising juxtaposition of familiar objects was a central strategy of both groups, and one that is apparent in Paolozzi's collages of the late 1940s.