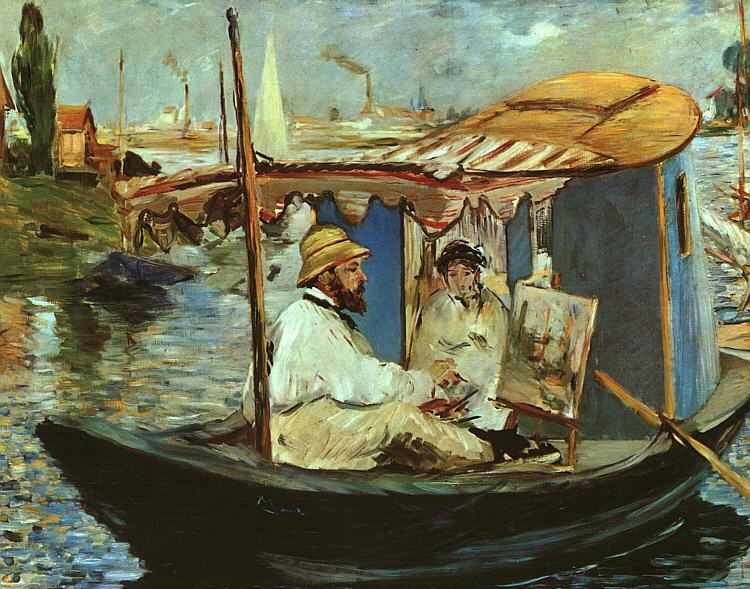 Monet in his Studio Boat

Manet painted Claude Monet in his Studio Boat in the summer of 1874 at Gennevilliers.

Partly no doubt because he was more interested in the old masters than the other Impressionists and took a more traditional view of the painter’s role in society, Manet was slow to take up the idea of painting on the spot, in the open air.

But that summer it all changed quite dramatically when he spent some time painting with Monet and Renoir at Argenteuil, a small town just down-river from Paris. There it was Monet’s convictions which especially affected him, and although he never became particularly interested in landscape as such, took to painting people out of doors.

Here he has captured Monet and his wife Camille in the boat which the painter used as a floating studio, rowing it up and down the Seine and stopping whenever he spotted a promising subject. Monet was often desperately poor, but could always rely on a loan from Manet – who was equally unpopular but less dependent on art for his income.

Thanks to Monet’s influence, Manet painted more often in the open air and lightened his palette. This picture receives a new freedom in treatment, Manet using smaller, more sketchy strokes and a brighter range of colors, and picking up in typical Impressionist fashion the light reflected from water and the almost abstract play of colors broken up by the ripples.

Monet used the ‘floating studio’ to paint many scenes along the River Seine, capturing ‘the effects of light from one twilight to the next’. Manet was to describe Monet as “the Raphael of water”.