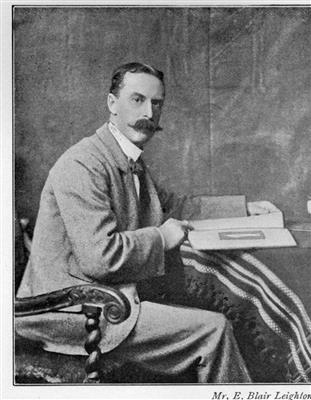 
Leighton was the son of the artist Charles Blair Leighton (1823–1855) and Caroline Leighton (née Boosey). He was educated at University College School, before becoming a student at the Royal Academy Schools. He married Katherine Nash in 1885 and they went on to have a son and daughter. He exhibited annually at the Royal Academy from 1878 to 1920.


Leighton was a fastidious craftsman, producing highly finished, decorative pictures, displaying romanticized scenes with a popular appeal. It would appear that he left no diaries, and though he exhibited at the Royal Academy for over forty years, he was never an Academician or an Associate.


The following obituary of Leighton is taken from a magazine published early in 1923. It is one of several publications to have given the year of birth as 1853 instead of the correct date of 1852, which error is in the process of being corrected in newer publications.