{{selectedLanguage.Name}}
Sign In Sign out
Action History
×
Home/ Artists / Proto Renaissance .../ Duccio/ The Calling of the Apostles Peter and Andrew 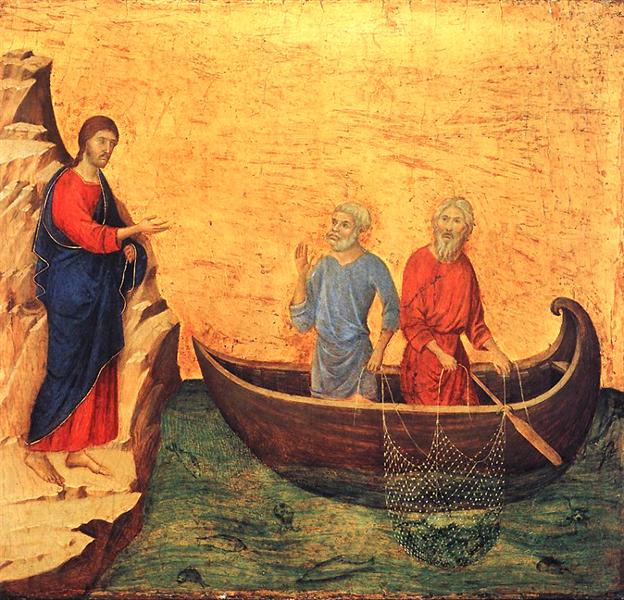 The Calling of the Apostles Peter and Andrew

This was one of the rear panels of Duccio’s magnificent Maestà in Siena cathedral. With more than fifty individual scenes, the altarpiece was about fourteen feet wide and towered to gabled pinnacles some seventeen feet over the main altar. It was installed in June 1311 after a triumphant procession through the streets of Siena. Priests, city officials, and citizens were followed by women and children ringing bells for joy. Shops were closed all day and alms were given to the poor. Completed in less than three years, the Maestà was a huge undertaking for which Duccio received 3,000 gold florins—more than any artist had ever commanded. Nevertheless, Duccio, like all artists of his time, was regarded as a craftsman and was often called on to paint ceiling coffers, parade shields, and the like. Not until the middle and later fourteenth century did the status of artists rise.

Duccio signed the main section of the Maestà, or “Virgin in Majesty,” which is still in Siena. His signature, one of the earliest, reads: “Holy Mother of God, be the cause of peace for Siena and life for Duccio because he painted you thus.” This plea for eternal life—and perhaps fame—signals a new self-awareness among artists. Within a hundred years signatures become commonplace.

This rear panel of the Maestà is at least partly the work of Duccio’s students and assistants.