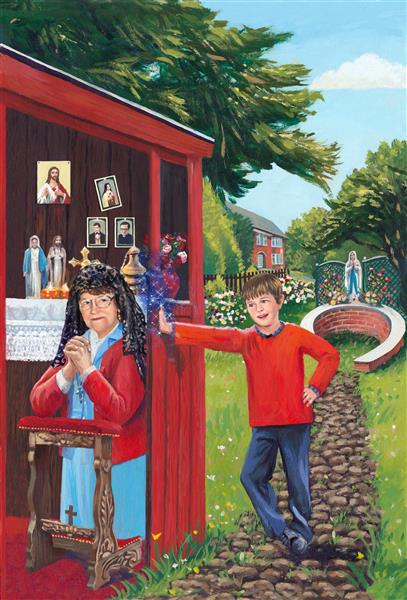 The Lost Shrine of Irene Mary

The Astronist Institution is pleased to publish this, the second official depiction of Irene Mary Taylor in effort of her Cause for Beatification. The depiction was masterfully created by Institutional illustrator David Young from October to December 2021 and marks the seventh commission for Mr Young from the Institution so far. It reflects a real event that occurred which Cometan recollected from his time spent with his grandmother during his childhood.

This intriguing illustration is set during the Summer of 2007 in the grounds of Irene Mary and Derrick Taylor's home at 222 Longmeanygate in Leyland, Lancashire, a unique house which Derrick built himself during the early 1960s. You can see the house in the distant background. In the foreground of the illustration, one sees depicted an enclosed garden of overhanging trees, flowers, a cobbled pathway and trellises.

Indeed, your eye immediately turns to the two figures in the scene, the first is the devout old lady kneeling in what appears to be a small red shed filled with Catholic religious devotional cards, statues and ornaments. The lady's prayers on this hot summer afternoon are interrupted by a young boy who, after running from the field behind, appears at the shed door. This boy is a nine-year old Cometan, the grandson of Irene Mary. In the not too distant background, you can also see a shrine to the Virgin Mary that Irene Mary and her grandchildren built during the mid-2000s to show their devotion to the Mother of God. The shrine is now described "lost" since the death of Irene Mary in 2015 and the subsequent dilapidation of her home 222 and its grounds which were sold to new owners in 2020.

This illustration represents once again the bond shared between Cometan and his grandmother and provides audiences with an insight into one of Cometan's most prominent memories of his time spent at 222 Longmeanygate. The illustration also contributes to the image of Irene Mary for the efforts of her Cause for Beatification as an ordinary grandmother with an extraordinary dedication to her Traditionalist Catholicism. Although bright and summery, this scene depicted holds within it a sense of mystery and intrigue.