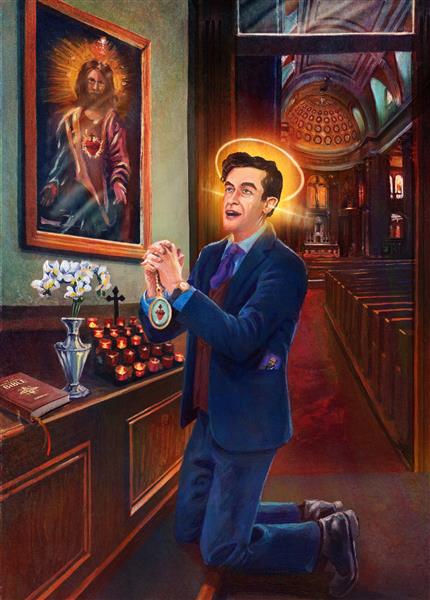 The Locutions of Derrick Taylor

The Astronist Institution publishes The Locutions of Derrick Taylor, the first official depiction of the grandfather of Cometan in aid of his Cause for Recognition in the Catholic Church with intentions to beatify. This astounding piece was illustrated by Mr David Young, an English artist who has now drawn several memorable commissions both of Cometan and of his grandmother Irene Mary Taylor.

This latest of Young’s illustrations takes us to the narthex of St Wilfrid’s Church in the city of Preston on the 31st May 1971. Derrick Taylor, then aged 40, steps into the church while his daughters prepare for and participate in a procession for Our Lady on the feast day of the Visitation. Derrick Taylor heads towards the famous depiction of the Sacred Heart of Jesus placed adjacent to the church’s entrance. At that time, Derrick Taylor was experiencing an intensive spiritual crisis of faith and sought refuge in the Sacred Heart of Jesus, the Catholic devotion that had been the initiator of Derrick’s instinct to convert to Catholicism from age seven.

This moment of Derrick Taylor kneeling before the Sacred Heart in the narthex of St Wilfrid’s Church embodied the culmination of years-long discontent, confusion and anguish over the reforms introduced by the Second Vatican Council. These reforms, no longer simply statements in a document or mere words in a speech, had, by this time, been implemented throughout the Church and had made their way to Lancashire, a bastion of the Catholic faith following the Protestant Reformation. Derrick Taylor always remained loyal to the Pope but felt a great degree of spiritual concern and worry over the direction the Church would head, especially with the implementation of Vatican II reforms being taken further than what the Pope had decreed.

One should understand that Derrick Taylor had only been confirmed into the Catholic faith for six years before the Second Vatican Council commenced. No doubt he wondered what he had converted to in learning that the distinct forms of Traditionalist Mass comprised of myriad rituals and Latin liturgy were to be done away with just a decade or so following his conversion. In his Sceptre Bulletin interview from 1995, Derrick Taylor explains the spiritual blindness he endured for years and the feeling that the Church he loved, and had so solemnly converted to, was being destroyed from within. When Derrick Taylor stepped into St Wilfrid’s Church that special day, he went in with the hope of finding guidance or some semblance of peace of mind that the Church was safe and that the direction it was being navigated was true to the message of Christ and the Church and Mass the Lord had first instituted.

This day was indeed the beginning of a new era for Derrick Taylor’s Catholicity; it was from this day forward that he had managed to engage to a new and remarkable height with God. Indeed, God the Father answered Derrick’s desperate supplications through the intercession of the Sacred Heart and spoke directly to him, asserting that he should not worry and that he should continue with his Mass. This was the overall message of God that was spoken to Derrick Taylor on this day in May 1971 and it was these instructions from his Lord that Derrick Taylor exactly followed for the remainder of his earthly life through his stalwart attendance of the Latin Mass, his continued adherence to Catholic doctrines and his continued love and devotion expressed for the Sacred Heart of Jesus. It is Derrick Taylor’s experience of interior locution in 1971 and his subsequent experience of the same supernatural phenomenon in 1978 (these called the McNally locutions) that have formed part of the basis for his grandson Cometan’s endeavour to have him recognised in the Church as an English Catholic figure who was Lancashire born and bred.

The mystical occurrence of interior locution is captured in this illustration through the use of colour, the halo showing God’s presence imbuing Derrick and the imagery of sound waves entering his ears. The awe and wonder experienced by Derrick Taylor during the locution is captured through his facial expression yet the anguish he felt prior over his spiritual crisis is captured in the tears rolling down his cheek. The various details included from the devotional card to the flowers to the candles are all featured with the intent of helping form the distinct beatific image of Derrick Taylor. Further detail is provided by the ornate nave of St Wilfrid’s Church featured in the background. The nave creates a truly mystical atmosphere for this illustration depicting the Sacred Heart locutions, one of the pivotal religious events in the life of Derrick Taylor.