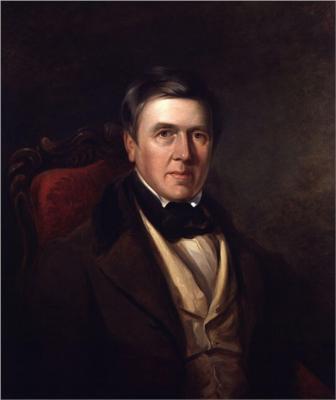 David Cox (29 April 1783 – 7 June 1859) was an English landscape painter, one of the most important members of the Birmingham School of landscape artists and an early precursor of impressionism.

He is considered one of the greatest English landscape painters, and a major figure of the Golden age of English watercolour.

Although most popularly known for his works in watercolour, he also painted over 300 works in oil towards the end of his career, now considered "one of the greatest, but least recognised, achievements of any British painter."

Cox was born on 29 April 1783 on Heath Mill Lane in Deritend, then an industrial suburb of Birmingham. His father was a blacksmith and whitesmith about whom little is known, except that he supplied components such as bayonets and barrels to the Birmingham gun trade. Cox's mother was the daughter of a farmer and miller from Small Heath to the east of Birmingham. Early biographers record that "she had had a better education than his father, and was a woman of superior intelligence and force of character". Cox was initially expected to follow his father into the metal trade and take over his forge, but his lack of physical strength led his family to seek opportunities for him to develop his interest in art, which is said to have first become apparent when the young Cox started painting paper kites while recovering from a broken leg.

By the late 18th century Birmingham had developed a network of private academies teaching drawing and painting, established to support the needs of the town's manufacturers of luxury metal goods, but also encouraging education in fine art, and nurturing the distinctive tradition of landscape art of the Birmingham School. Cox initially enrolled in the academy of Joseph Barber in Great Charles Street, where fellow students included the artist Charles Barber and the engraver William Radclyffe, both of whom would become important lifelong friends.

At the age of about 15 Cox was apprenticed to the Birmingham painter Albert Fielder, who produced portrait miniatures and paintings for the tops of snuffboxes from his workshop at 10 Parade in the northwest of the town. Early biographers of Cox record that he left his apprenticeship after Feidler's suicide, with one reporting that Cox himself discovered his master's hanging body, but this is probably a myth as Fielder is recorded at his address in Parade as late as 1825. At some time during mid-1800 Cox was given work by William Macready the elder at the Birmingham Theatre, initially as an assistant grinding colours and preparing canvases for the scene painters, but from 1801 painting scenery himself and by 1802 leading his own team of assistants and being credited in plays' publicity.

In 1804 Cox was promised work by the theatre impresario Philip Astley and moved to London, taking lodgings in 16 Bridge Row, Lambeth. Although he was unable to get employment at Astley's Amphitheatre it is likely that he had already decided to try to establish himself as a professional artist, and apart from a few private commissions for painting scenery his focus over the next few years was to be on painting and exhibiting watercolours. While living in London, Cox married his landlord's daughter, Mary Agg and the couple moved to Dulwich in 1808.