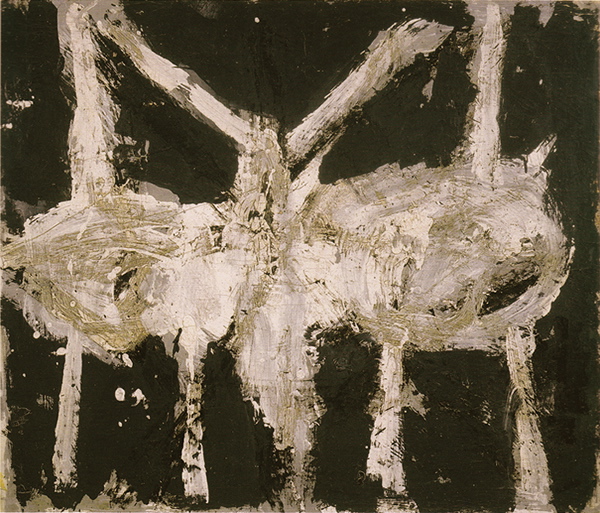 Min-OE (1951), is one of the best-known paintings from Cy Twombly’s early career. The artist painted it while he was a student at the renowned Black Mountain College in North Carolina. This was a formative period for Twombly, as he began to develop his artistic principles. Min-OE demonstrates the artist’s interests in symmetrical forms, which the artist stated were inspired by Luristan bronzes. The small ornaments, found in Western Iran, date back to the early Iron Age (approximately 1000 to 650 BC). Common themes depicted on Luristan bronzes were animals or struggles between man and animal. What captured Twombly’s eye was the symmetry of these highly stylized figurative objects, which he reproduced in the composite of forms and lines on the canvas. But unlike Luristan bronzes, Min-OE is an abstract artwork without an explicit representative dimension.

Twombly’s inquiry into ancient civilizations was not limited to Luristan bronzes. In 1950 he wrote about his interest in ‘primitive art’ of Native American, Mexican and African civilizations. Like many abstract expressionists, the artist was impressed by the succinct expression found in these artworks. For Twombly specifically, it was not only the fresh simplicity of ‘primitive art’, but also the rich textures of these aged surfaces and the ritualistic and superstitious functions that were attributed to some of these objects. In Min-OE, the expressive brushstrokes create a rich texture similar to the corroded surfaces of excavated archaeological artifacts.

The other notable element of Min-OE is the monochromatic palette. In general, Twombly’s paintings from the 1950s were devoid of color. It is possible that he was influenced by the New York School painter and his professor in Black Mountain, Robert Motherwell. Although Motherwell publicly praised Twombly’s talent, little is known about their intimate relationship and how Twombly felt about Motherwell’s work. In the early in 1950s, Twombly formed a close friendship with artist Robert Rauschenberg, and some of Rauschenberg’s influence can be traced to Twombly’s work. The two met while studying in the Art Students League of New York, and Rauschenberg encouraged Twombly to attend Black Mountain College. In the fall of 1952, they travelled together to North Africa and Europe and later they shared a studio in New York. It is possible that Rauschenberg, who at the time was creating black paintings, encouraged Twombly to follow a similar path. Some accounts confirm that during the 1940s Twombly used color in his paintings, however these artworks were either destroyed or lost. Besides the monochromatic palette, other parallels exist between the works of Twombly and Rauschenberg. The duality and symmetry found in Min-OE is comparable to Rauschenberg’s sculpture, The man with two souls (1950). At present, Min-OE is part of the Robert Rauschenberg collection, and most likely it is the only Twombly painting from this period in the collection.