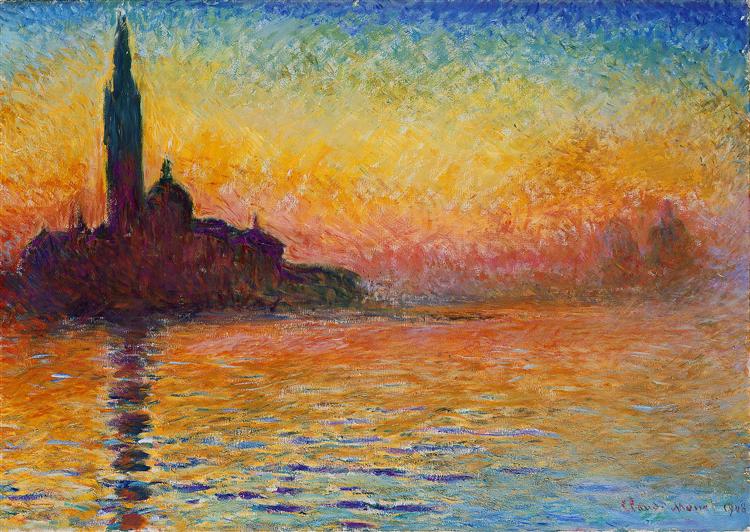 Saint-Georges majeur au crépuscule (Eng: Dusk in Venice, San Giorgio Maggiore by Twilight or Sunset in Venice) refers to an Impressionist painting by Claude Monet, which exists in more than one version. Monet painted this subject as part of a series of views of the monastery-island of San Giorgio Maggiore. These were begun in 1908 when the 68-year-old artist made his only visit to Venice.

One version of San Giorgio Maggiore at Dusk was acquired in Paris by the Welsh art collector Gwendoline Davies. She bequeathed it to the Art Gallery (now National Museum Cardiff) in Cardiff, Wales. The painting is normally on display there.

There is a version in the Bridgestone Museum of Art.

San Giorgio Maggiore al Crepuscolo is approximately two-by-three feet and painted in oil on canvas. It depicts mysterious buildings that seem to magically appear from the surrounding landscape, they almost seem to float in the background. The forms are gently inserted, though not enough to disguise their identity. The painting focuses on the Church of San Giorgio Maggiore with its bell tower rising to the top of the painting. To the right are the faintly visible domes of Santa Maria della Salute and the mouth of the Grand Canal.

Monet painted the church of San Giorgio Maggiore in six lighting conditions. With this varied approach, the paintings focused on the ‘nature of experience.’ He was particularly impressed by the Venetian sunsets, “these splendid sunsets which are unique in the world.” He had previously been inspired by other sunsets, such as those of Normandy (in Rouen Cathedral and Haystacks, his series of the 1890s) and London (Houses of Parliament).

Monet and his wife Alice stayed at the Palazzo Barbaro for a couple of weeks, and then moved to the Hotel Britannia, where they stayed until December. According to Mme. Monet, the Britannia had a view, "if such a thing were possible, even more beautiful than that of Palazzo Barbaro..." Monet painted looking out from this hotel, but not, it seems, in the case of this particular painting. Although the view from the hotel included the church of San Giorgio Maggiore, the painting appears to have been viewed from the waterfront known as the Riva degli Schiavoni, where the island forms a focal point of the view.

Monet was reportedly reluctant to paint from the waterfront out of fear of conforming to other artists who were drawn to Venice, such as Renoir or Manet. San Giorgio Maggiore was a favorite subject for painters, including the proto-Impressionist Turner.

Monet felt Venice was a city "too beautiful to be painted", which may be why he returned with many paintings unfinished to Giverny, his home in France. However, he had already retreated from his earlier practice of painting from life, in front of the subject. He worked on the Venetian scenes at home and the death of his wife Alice in 1911 seems to have been a factor in their completion. In 1912 he held a successful exhibition Claude Monet Venise at the gallery Bernheim-Jeune in Paris.