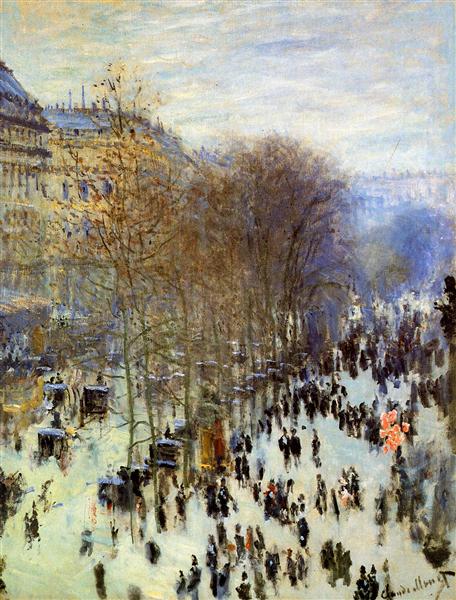 From the late 1860s, Monet and other like-minded artists, met with rejection from the conservative Académie des Beaux-Arts which held its annual exhibition at the Salon de Paris. During the latter part of 1873, Monet, Renoir, Pissarro, and Sisley organized the Société anonyme des artistes peintres, sculpteurs et graveurs to exhibit their artworks independently. At their first exhibition, held in April 1874, Monet exhibited the work that was to give the group its lasting name, Impression, Sunrise. Among the works Monet included in the first Impressionist exhibition was The Luncheon, 1868, which features Camille Doncieux and Jean Monet. The painting was rejected by the Paris Salon of 1870.

Also in this exhibition was a painting titled Boulevard des Capucines, a painting of the boulevard done from the photographer Nadar's apartment at no. 35. Monet painted the subject twice and it is uncertain which of the two pictures, that now in the Pushkin Museum in Moscow, or that in the Nelson-Atkins Museum of Art in Kansas City (shown here) was the painting that appeared in the groundbreaking 1874 exhibition, though more recently the Moscow picture has been favoured.