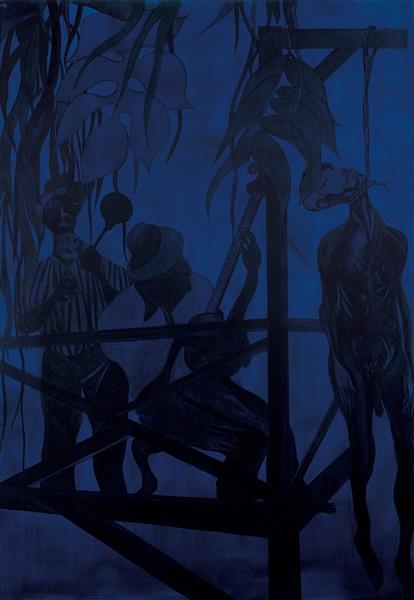 Iscariot Blues (2006) is part of a series of blue paintings that the artist executed after his move to Trinidad in 2005. Ofili first visited Trinidad in 2000, as part of an artist residency. Soon after, the impact of the Caribbean environment became noticeable in his art. It was one of the inspirations for the series of red, black, and green paintings, which were exhibited at the 50th Venice Biennale in 2003.

The blue paintings signify a significant stylistic departure for Ofili, who is best known for applying different materials to his paintings, like paper cutouts, glitter, pins, and elephant dung. Instead, in Iscariot Blues, and other paintings like Blue Riders (2006) and Blue Steps (Fall from Grace) (2011), the artist focused on the flatness of the surface and a monochrome palette of blue, black and silver. This new approach is connected to his life in Trinidad, especially to the experience of nighttime. The artist explained how twilight and darkness in Trinidad ignite the imagination: the hilly landscape and dense vegetation give a sense that something is happening on the other side. Unlike night in a big city that is illuminated by artificial lights, in Trinidad, one must rely on the moonlight and the sensitivity of the eyes. In these paintings, Ofili aims to capture this mood, the night that is mysterious and even frightening. The blue paintings took their name from the early 20th-century Expressionist group The Blue Rider, established by Russian and German artists. The art historian Christopher Zuschlag pointed out that philosophical and artistic ideas associated with The Blue Rider artists like Franz Marc appeal to Ofili: the idea of creating a synthesis between the arts, both in connecting it to music and in equally valuing European and non-European art, high art and folk art.

Iscariot Blues portrays two local musicians playing Parang, favorite folk music from Trinidad and Tobago, and the Bobolee figure - an Easter tradition in Trinidad where an effigy of Judas Iscariot is hung and beaten by villagers on Good Friday. The shapes of the musicians were inspired by plywood cutouts of musicians in Lopinot, a village in Trinidad. The artist was attracted to the flatness of the cutouts, and he took a few photographs from which he later painted the figures before adding the figure of Judas. Ofili chose to paint Judas Iscariot naked to reflect the feeling of shame and regret that led Judas to commit suicide after he betrayed Jesus Christ. The nudity exposes the figure, his shame, and remorse. By using a silver base, Ofili’s figure of Judas glows, as if it is absorbing or reflecting the moonlight. The monochrome palette of blues is also linked to Trinidad folklore: the ‘jab jab’ or ‘blue devil’ is a carnival beast that stalks the streets. In the context of the Carnival, blue symbolizes ‘evil’ and ‘destruction.’ The artist will later directly address the folklore of the ‘blue devil’ in the painting Blue Devils (2014).