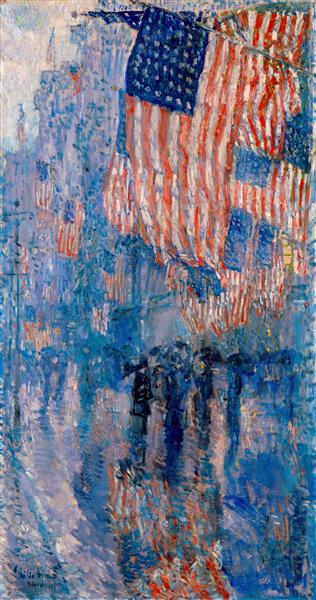 The Avenue in the Rain

The Avenue in the Rain is a 1917 oil painting by the American painter Childe Hassam. The Impressionist work depicts Fifth Avenue in New York City in the rain, festooned with US flags. The painting is one of six works by Hassam in the permanent art collection of the White House in Washington DC.

Between 1916 and 1919, Childe Hassam painted around 30 paintings of streets decorated with flags. This work was painted in February 1917, shortly before the US joined the First World War, at a time when patriotic fervour was rising in the US. The previous month, Germany extended its unrestricted submarine warfare to neutral ships, including vessels bearing the US flag. The Zimmermann Telegram became public knowledge at the end of February 1917, and the US declared war on Germany on 6 April 1917.

The painting measures 42 by 22.25 inches (106.7 cm × 56.5 cm). It has dominant tones of red and blue, with whites for the stars and stripes; several dark figures in the middle distance are holding umbrellas, and those further away fade into the blue background. The flags seem to float in mid-air, flying from flagpoles that project out from the buildings on the street, but the buildings are not visible. The flags and human figures are reflected on the wet street and sidewalk. Childe Hassam may have been influenced by two similar works of Claude Monet depicting national celebrations in Paris on 30 June 1878.

It was donated to the White House in 1963 by Thomas Mellon Evans. It was hung between the windows in John F. Kennedy's blue-themed President's Bedroom (now a private sitting room, adjacent to the Yellow Oval Room on the second floor of the White House), and then was in the President's Dining Room for many years. It was hung in the Oval Office by Bill Clinton and Barack Obama.