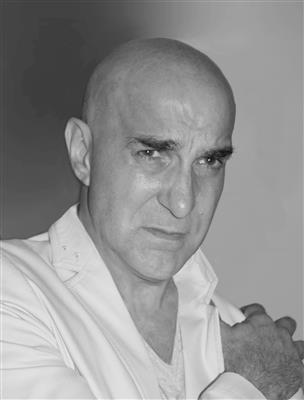 Chicote CFC studied his primary, secondary and pre-university in the "Centre of studies John XIII" from Alcorcon (Madrid). At a young age starts to give symptoms of a great sense and artistic sensitivity, qualities that make it possible for you to school, just over 12 years, performing his first works of a certain degree of complexity through the use of techniques such as tempera, watercolor, ink or oil.
After a first career in the childhood as self-taught, with the only method and reference of study it observation and imitation of them classic of the art as well as of them avant-garde of the surrealism and abstraction of it time, decides to in 1984 in order complement and develop their faculties artistic, enter in the "Center of studies academic of art-Artium" in Madrid-Spain (governed by "Eduardo Peña", remarkable painter and heir of a consolidated saga generation of artists plastics) all this accompanied of varied raids in activities of different nature business and economic. Their work begins to intersperse painting with elements and technical mixed.
During all this time manages to introduce is more to fund in the world artistic arriving to participate in exhibitions collective ("Sala Eureka" "Duran Gallery" - Antiques) e also begins to take involuntarily contact with the world of it photography thanks to them numerous travel that carries to out and that still today not you have abandoned, what you allows of way progressive go acquiring them knowledge and the experience required for make of this field a new and particular method of expression and creativity.
In 1985 he participated as a collaborator and art critic in the newsletter fortnightly "Nifer", Alcorcon - Madrid.
A start of studies in the branch of science and a great interest by the new technologies have been factors determinants for his quick connection with them new advances computer. While that the media evolved and allowed have of tools of creation more agile, was specializing is and repairing in the design and image digital and in the search of new ways of treat the art. More than 25 years as designer graphic, photographer, painter and in the world of the art digital completes its path.
The insatiable thirst of knowledge both cultural, artistic as human, you have pushed to continue traveling and to introduce is to fund in the world of the photography, achieving meet instant plastic and documentary of more than 80 countries, through them five continents.
In the year 2012 creates the "Simbiosismo" or "art movement symbiotic" that merges photography and painting as well as vision and cognition, all under a digital environment wrapped in innovative topics supported in a peculiar sociological human environment study, always loaded with a background of social criticism in an attempt "to raise level of artwork of very high standard pictorial photography and an excellent photographic optics the painting".
All his work is accentuated evidence of the huge and terrible disappointment in the "duality that possesses human be constructive motivation and relaxation destructive"
Chronology of events: