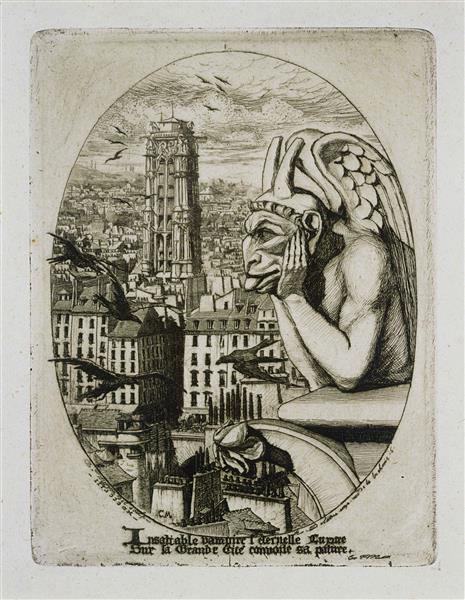 Provenance: the Philip Adrian Coates Collection, UK, and originally from C. W. Dowdeswell, with the wetstamp on the reverse (L. 690)

Meryon's penchant for fantastic themes here sets the famous chimera of Notre Dame, grimacing over a Parisian cityscape, against the Tour Saint Jacques in the background. The title derives from a monster in Greek mythology (characterised by a woman's head, the body of a bird, and rapacious talons), which was thought to suck the lifeblood of newborn children; the commonplace representation of this horrific figure dates to the Middle Ages, and was often related to practices of sorcery.

Le Stryge, Charles Negre, 1853, (Musee d'Orsay)Although often considered to be a Medieval gargoyle, this sculpture is in fact neither. A gargoyle is an outcropping structure used to evacuate water from the edifice, which this is not. And the sculpture is indeed late; it was designed by Viollet-le-Duc, who undertook the restoration of Notre Dame in 1845, and the present Galerie des Chimères is merely one of his rather more fanciful embellishments.

It is probable though that Meryon was les interested in the "authenticity" of the figure, in which he instead saw the personnification of "Luxuria" (as Meryon referred to it in a letter to his father, cited byThomas Shotter Boys, Tour Saint Jacques, 1836 (Louvre) Schneiderman, page 56; see note below).

The Tour Saint Jacques is a vestige of the old church of Saint-Jacques-de-la-Boucherie, which purportedly held relics of Saint James; the belltower dates to the early 16th century, and is all that remains after the church was dismanteled during the French Revolution. In 1852, the "délicieux tour de Nicolas Flamel" was restored, which may well have prompted Meryon's interest.