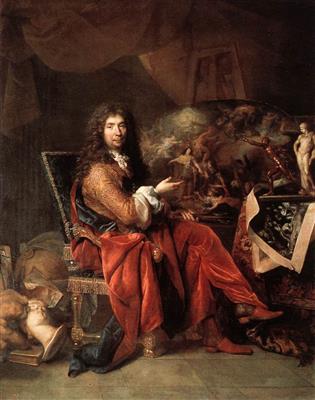 Charles Le Brun (24 February 1619 – 12 February 1690) was a French painter, art theorist, interior decorator and a director of several art schools of his time. As court painter to Louis XIV, who declared him "the greatest French artist of all time", he was a dominant figure in 17th-century French art and much influenced by Nicolas Poussin.


Born in Paris, he attracted the notice of Chancellor Séguier, who placed him at the age of eleven in the studio of Simon Vouet. He was also a pupil of François Perrier. At fifteen he received commissions from Cardinal Richelieu, in the execution of which he displayed an ability which obtained the generous commendations of Nicolas Poussin, in whose company Le Brun started for Rome in 1642.


In Rome he remained four years in the receipt of a pension due to the liberality of the chancellor. There he worked under Poussin, adapting the latter's theories of art.


On his return to Paris in 1646, Le Brun found numerous patrons, of whom Superintendent Fouquet was the most important, for whom he painted a large portrait of Anne of Austria. Employed at Vaux-le-Vicomte, Le Brun ingratiated himself with Mazarin, then secretly pitting Colbert against Fouquet. Colbert also promptly recognized Le Brun's powers of organization, and attached him to his interests. Together they took control of the Academy of Painting and Sculpture (Académie royale de peinture et de sculpture, 1648), and the Academy of France at Rome (1666), and gave a new development to the industrial arts.


Another project Le Brun worked on was Hôtel Lambert. The ceiling in the gallery of Hercules was painted by him. Le Brun started work on the project in 1650, shortly after his return from Italy. The decoration continued intermittently over twelve years or so, as it was interrupted by the renovation of Vaux le Vicomte.


In 1660 they established the Gobelins, which at first was a great school for the manufacture, not of tapestries only, but of every class of furniture required in the royal palaces. Commanding the industrial arts through the Gobelins—of which he was director—and the whole artistic world through the Academy—in which he successively held every post—Le Brun imprinted his own character on all that was produced in France during his lifetime. He was the originator of Louis XIV Style and gave a direction to the national tendencies which endured centuries after his death.


The nature of his emphatic and pompous talent was in harmony with the taste of the king, who, full of admiration of the paintings by Le Brun for his triumphal entry into Paris (1660) and his decorations at the Château Vaux le Vicomte (1661), commissioned him to execute a series of subjects from the history of Alexander. The first of these, "Alexander and the Family of Darius," so delighted Louis XIV that he at once ennobled Le Brun (December, 1662), who was also created Premier Peintre du Roi (First Painter of the King) with a pension of 12,000 livres, the same amount as he had yearly received in the service of the magnificent Fouquet. The King had declared him "the greatest French artist of all time".