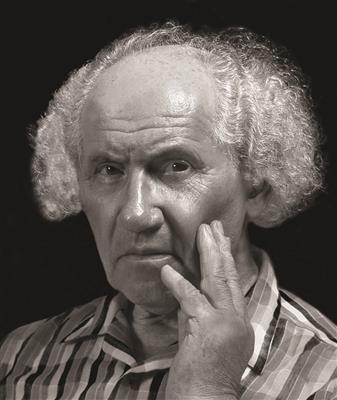 Chaim Goldberg, circa 1995 in his Boca Raton home.

Chaim Goldberg (March 20, 1917 – June 26, 2004) was a Polish-Jewish artist, painter, sculptor, and engraver. He is known for being a chronicler of Jewish life in the small Polish village (or Shtetl) where he was born, Kazimierz Dolny in eastern Poland; and as a painter of Holocaust era art, which to the artist was seen as an obligation and art with a sense of profound mission.

Following World War II he emigrated to Israel and later to the United States where he died in 2004.

Chaim Goldberg was born in a wooden clapboard house built by his father, a village cobbler. As a young boy of 6 he gravitated to creating little figurines carved from stones. Later he took up drawing and painting with basic shoemaker paints that he found at his father's workbench. He was the ninth child and the first boy after eight girls. He grew up in a religious home in Kazimierz Dolny. He would observe and draw the beggars and klezmers who frequented his home as guests. His father would encourage their stays by letting it be known that the humble Goldberg home was open for those who could not pay for their night stay at any of the inns. They were surely welcome there. These characters became Chaim's early models.

On a crisp day in the fall of 1931, Dr. Saul Silberstein, a student of Sigmund Freud who was doing post doctorate work on his book, Jewish Village Mannerisms came into the Goldberg cobbler workshop to have his shoes repaired. As he waited for his shoes, he noticed the numerous art works that were attached to the wall with shoe nails and inquired who the artist was. Silberstein spent the entire night reviewing the young artist’s work. In the morning they went by foot to Lublin, a distance of 26 miles and Dr. Silberstein obtained the opinions of several respected individuals of the work by Chaim Goldberg. He then got him several small scholarships based on these letters of recommendation. This helped finance his early education at the "Józef Mehoffer School for Fine Arts", in Kraków, from which he graduated in 1934. Dr. Silberstein was able to interest several other wealthy sponsors, such as the honorable Felix Kronstein, a judge, and a newspaper publisher who supported the artist through his graduation from the Academy of Fine Arts in Warsaw. At 17, he was the youngest to be admitted and studied under the Rector of the Academy and Professor Tadeusz Pruszkowski, Kowarski, Władysław Skoczylas and Jan Gotard (pl).

The beauty of Kazimierz Dolny had long ago been discovered by artists who had flocked there in large numbers over the years. Between the First World War and the Second World War, Kazimierz Dolny became known as an Art Colony as well. Professor Tadeusz Pruszkowski had built a summer studio in the mountains and attracted his students to come down and paint outdoors. many of these artists as well as older ones painted the life they saw and the landscape. Chaim Goldberg became stimulated by this traffic of artists and began to do art as well. When he was discovered he had not attended any school or private lessons. He watched what the other artists did and was encouraged to do the same; set himself up with a home-made easel and paint outdoors. When he was discovered at the age of 14, his collection included landscapes as well as paintings of the vagabond types that frequented his home as guests.