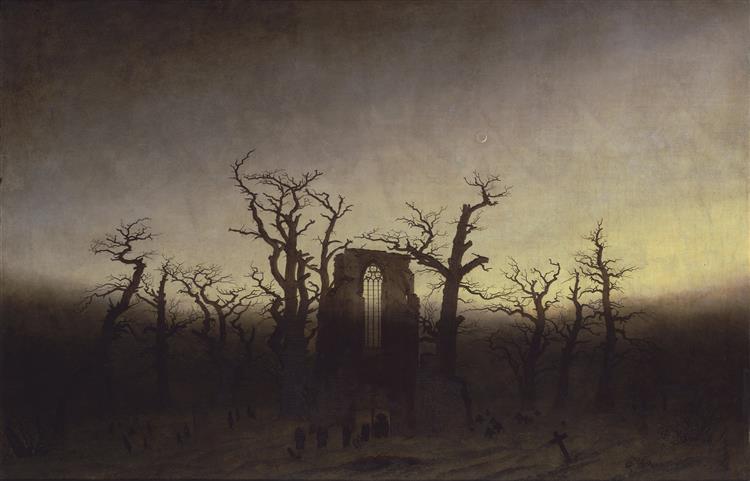 The Abbey in the Oakwood

The Abbey in the Oakwood (German: Abtei im Eichwald) is an oil painting by Caspar David Friedrich. It was painted between 1809 and 1810 in Dresden and was first shown together with the painting The Monk by the Sea in the Prussian Academy of Arts exhibition of 1810. On Friedrich's request The Abbey in the Oakwood was hung beneath The Monk by the Sea. This painting is one of over two dozen of Friedrich's works that include cemeteries or graves.

After the exhibition both pictures were bought by king Frederick Wilhelm III for his collection. Today the paintings hang side by side in the Alte Nationalgalerie, Berlin.

A procession of monks, some of whom bear a coffin, head toward the gate of a ruined Gothic church in the center of the painting. Only two candles light their way. A newly dug grave yawns out of the snow in the foreground, near which several crosses can be faintly discerned. This lower third of the picture lies in darkness—only the highest part of the ruins and the tips of the leafless oaks are lit by the setting sun. The waxing crescent moon appears in the sky.

The picture appeared at a time when Friedrich had his first public success and critical acknowledgment with the controversial Tetschener Altar. Although Friedrich's paintings are landscapes, he designed and painted them in his studio, using freely drawn plein air sketches, from which he chose the most evocative elements to integrate into an expressive composition. The Abbey in the Oakwood is based upon studies of the ruins of Eldena Abbey, which reappear in several other paintings. The same trees, in slightly altered forms, can also be seen in other works.

Eldena Abbey may well have had personal meaning for Friedrich, as it was destroyed during the Thirty Years War by invading Swedish troops, who later used bricks from the abbey to construct fortifications. In the painting Friedrich draws a parallel between those actions and the use of Greifswald churches as barracks by occupying French soldiers. Thus, the funeral becomes a symbol of "the burial of Germany's hopes for resurrection".

Friedrich may have begun work on The Abbey in the Oakwood in June 1809 after a stay in Rügen, Neubrandenburg. On 24 September 1810, shortly before the Berlin Academy exhibition, Carl Frederick Frommann described the setting sun and half-moon of the nearly-finished painting.