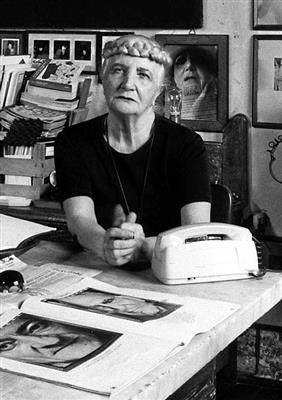 
Born on 17 April 1918, Olga Carolina Rama was the youngest of three children born to Marta (née Pugliaro) and Amabile Rama, who had just returned to Turin the year before their daughter's birth after a six-year stint as migrant workers in Argentina. Much of Rama's earliest frame of reference comes from factory life. Through much of the 1920s, the business and the family prospered. Rama took riding lessons. She remembered it as a carefree time during which the family sang operatic arias and played dress-up at home. Her father, Amabile Rama, was a small-scale manufacturer in the engineering industry who produced automobiles under the trademark "Sintesi" as well as unusual unisex bicycles under the trademark "OLT". Among those working in his factory, at Via Digione 17 in Turin, there was a model employee, Vittorio Valletta, who in 1927 left "Sintesi" to place his talents at the service of FIAT. And it was following the birth of the FIAT that her father's company began to go downhill, and was declared bankrupt while Carol was still a child. Hard years followed for the previously prosperous Rama family. Her once secure middle-class family was socially marginalized. Gone were the afternoons of singing operatic arias and taking riding lessons. Rama said, "I started to experience rejection and derision from the same circles that had showered me with privileges before." Carol Rama's mother, Marta was committed to a psychiatric hospital in 1933; Rama was 15 years old. Six years later, Amabile, Rama's father, committed suicide.


Rama was still forming herself as a young woman during her mother's mental breakdown. Frequent visits to the asylum proved decisive: "I felt comfortable in that surrounding. Because it's there I began to have manners and upbringing without either cultural preparation or etiquette." Observing the unusual, quixotic characters in the asylum and absorbing that atmosphere has a liberating effect on the budding artist, which would inform her whole aesthetic and world view. Rama had enrolled at the art academy but school would not be her path forward; she skipped class and dropped out. Right off the bat she intuitively possessed her own self-assured style, line quality, subject matter, and twisted perspective. Specificity of vision, brazenly expressed, distinguishes Rama's earliest works.


As a painter, Rama began with sex and with watercolor. Infused with inwardness, watercolor has an intimate relation to the painter's body, with brushwork that tends to revolve around hand and wrist action, much like writing; its scale suited Rama's tabletop home-studio set-up. A medium of dilution and pollution, bleeding and spillage, watercolor was just the right thing for the then-young artist fascinated by bodies, orifices, fluids, and their intersubjective exchange. Color in her early watercolors is generally applied sparingly, in pale washes or barely at all, with strategic, vivid punctuations that draws attention to key erogenous zones: mouths, tongues, nipples, cunts, dicks, and assholes- wet holes and erotic plumbing primed for liquid flow. Of all the orifices, the mouth is Rama's favorite, as it is the most representative of desire. Her watercolors redesign anatomies, amputate and reorder limbs, realign orifices, and scramble physiological functions. Her women are often depicted armless, legless, or both, appearing broken like damaged classical ruins from Italy's ancient past.