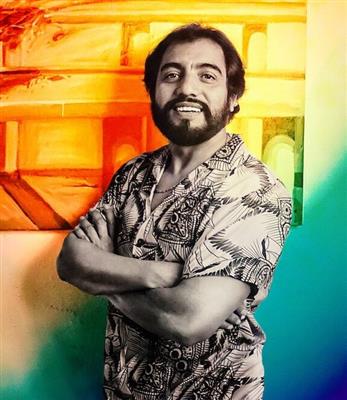 
Almaraz was born on October 5, 1941 in Mexico City, Mexico to parents Rose and Rudolph Almaraz. His family moved when he was a young child, settling in Chicago, Illinois, where his father owned a restaurant for five years and worked in Gary steel mills for another four. The neighborhood Almaraz and his brother were raised in was multicultural, which led him to appreciate the melting pot of American culture. During his youth in Chicago, the family traveled to Mexico City frequently, where Almaraz reports having his "first impression of art" that "was both horrifying and absolutely magical", in other words "Sublime".


When Almaraz was age nine his family moved to Los Angeles on a doctor's recommendation that his father seek a warm climate to assuage his rheumatism, and also as a result of family problems, first settling in Wilmington, later moving to the then-rural Chatsworth, where they lived in communal housing with other Mexicans. The family then relocated to Beverly Hills, and later to the barrio of East Los Angeles. Almaraz's interest in the arts, nascent in Chicago, blossomed after his family moved to California, and the sense of mobility developed after so many moves later allowed him to connect with migrant farmworkers and their children.


He graduated from Garfield High School in 1959 and attended Los Angeles City College, studying under David Ramirez, and took summer classes at Loyola Marymount University. Loyola offered him a full scholarship, but he declined it in protest of the University's support of the Vietnam War and stopped professing the Catholic faith altogether. He attended California State University, Los Angeles (CalState LA), where he befriended Frank Romero.


In 1965, Almaraz moved to New York City, with Dan Guerrero, the son of Lalo Guerrero. He left after six months to take advantage of a scholarship offered him by Otis Art Institute. He returned to New York and lived there from 1966 to 1969, where he struggled as a painter in the middle of the New Wave movements of the era.


While in New York, he also wrote poetry and philosophy. Almaraz's poems and philosophical views have been published in fifty books.


After returning to California, Almaraz almost died in 1971, and was given the last rites. It has been said that he had an experience with God during his convalescence. By 1972, he was already involved with Cesar Chavez and the United Farm Workers (UFW).


In 1973, he was one of four artists who formed the influential artist collective known as Los Four. In 1974, Judithe Hernández, who was a friend and classmate from graduate school at Otis Art Institute became the fifth member and the only woman in Los Four. With the addition of Hernández, the collective exhibited and created public art together for the next decade and have been credited with bringing Chicano art to the attention of mainstream American art institutions. He also painted for Luis Valdez's Teatro Campesino. Some of his murals are heavily influenced by the actos from Teatro Campesino.