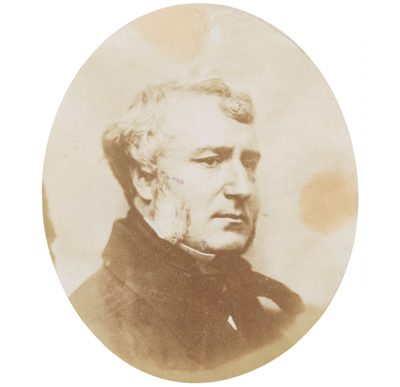 Baron Pietro Carlo Giovanni Battista Marochetti RA (14 January 1805 – 29 December 1867) was an Italian-born French sculptor who worked in France, Italy and Britain. He completed many public sculptures, often in a neo-classical style, plus reliefs, memorials and large equestrian monuments in bronze and marble. In 1848, Marochetti settled in England, where he received commissions from Queen Victoria. Marochetti received great recognition during his lifetime, being made a baron in Italy and was awarded the Legion of Honour by the French government.


Carlo Marochetti was born in Turin, where his father, Vincenzo, a former priest, was a local government official and professor of eloquence at Turin University, but after the family moved to Paris, Carlo was brought up as a French citizen. He studied at the Lycée Napoléon and then studied sculpture at the École des Beaux-Arts in Paris where his teachers were François Joseph Bosio and Antoine-Jean Gros. At the Paris Salon in 1827 he exhibited a marble statue of A Young Girl playing with a Dog which won a silver medal. Between 1822 and 1830 Marochetti frequently spent long periods in Rome where his mother was resident and where he collaborated with François-Joseph Duret and Antoine Étex and worked briefly at the studio of the Danish sculptor Bertel Thorvaldsen.


From 1832 to 1848 Marochetti lived in Paris and largely adopted a neo-classical Romantic style of sculpture. He married Camille de Maussion in 1835 and together they had two sons and a daughter. In Paris, Marochetti received two significant commissions. One was for a relief panel of the Battle of Jemappes on the Arc de Triomphe and the other for a large marble statue group, the Elevation of Mary Magdalene for the altar of the Church of La Madeleine. He delayed completing the altar group to create a monumental equestrian statue of Emmanuel Philibert, Duke of Savoy which he donated to the city of Turin. The king of Sardinia, Charles Albert rewarded Marochetti for his gift by making him a baron of the kingdom of Italy. Before being sent to Italy the Philibert statue was displayed in the courtyard of the Louvre Palace during 1838. This effectively established Marochetti's reputation for creating equestrian monuments and led to him being commissioned to create such a statue of Ferdinand, Duke of Orleans, which stood in the courtyard of the Louvre for four years. In 1839 the French government awarded him the Legion of Honour. During 1840 Marochetti was competing to win both the commission for a monument to the Duke of Wellington for the city of Glasgow and for the commission to design the tomb of Napoleon for Les Invalides in Paris. Although he won the Glasgow commission, Marochetti's proposal for the tomb attracted wide-spread public criticism in France and was rejected.


When his father died, Marochetti inherited the family chateau at Vaux-sur-Seine outside of Paris and served as mayor of the town there from 1846. After the fall of the July Monarchy in 1848, and his subsequent failure to win a seat in the National Assembly, Marochetti followed the French king Louis-Philippe into exile in the United Kingdom.