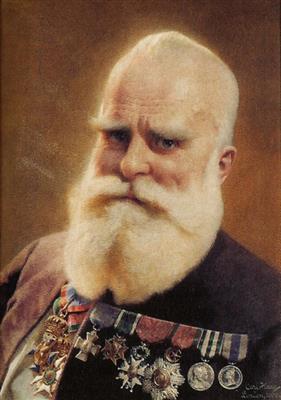 Carl Haag (20 April 1820 – 24 January 1915) was a Bavarian-born painter who became a naturalized British subject and was court painter to the duke of Saxe-Coburg and Gotha.


Haag was born in Erlangen, in the Kingdom of Bavaria, and was trained in the Academy of Fine Arts Nuremberg and at Munich. He initially practised as an illustrator and as a painter in oils of portraits and architectural subjects; but in 1847 he settled in England, where he studied English watercolour techniques. After this he devoted himself to watercolours.


In 1850 was elected an associate of the Royal Society of Painters in Water Colours before becoming a full member in 1853. He also enjoyed the patronage of Queen Victoria.
Between 1858 and 1860, he travelled to the Middle East, at first staying for more than a year in Cairo where he shared a studio with artist, Frederick Goodall. Later he journeyed to Jerusalem, Lebanon and Syria before returning to Cairo. During this period, he made many sketches which he worked up into paintings after returning to London. He returned to Egypt in 1873-74 to gather inspiration for further Oriental paintings.


He was a prolific and important painter Holy Land scenes. He gained a considerable reputation for his firmly drawn and meticulously elaborated paintings of Eastern subjects. Some of his depictions of the Middle East are in the Israel Museum's collection. In 1903, he retired and towards the end of his life, Haag left England and returned to the newly united German Empire, where he died in Oberwesel.