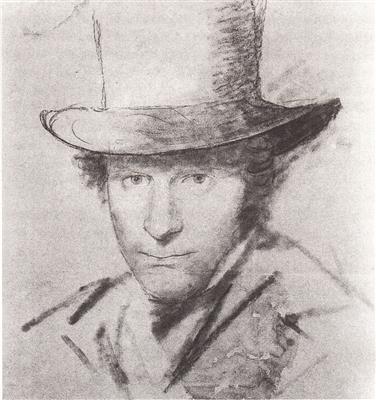 Carl Eduard Ferdinand Blechen (29 July 1798, Cottbus – 23 July 1840, Berlin) was a German landscape painter and a Professor at the Academy of Arts, Berlin. His distinctive style was characteristic of the Romantic ideals of natural beauty.


His father was a minor tax official from Regensburg. From 1805 to 1815 he attended the Lyceum at the Oberkirche St.Nikolai in Cottbus. His parents could not afford to pay for any further education, so they apprenticed him to a banker and he was engaged in that profession until 1822, when an increasing interest in art led him to the Berlin Academy.


After a short study trip to Dresden and Saxon Switzerland, he returned to Berlin and obtained a position as a decorator for the Royal Theater on the Alexanderplatz. He married in 1824 and became a member of the Berlin Artists' Association in 1827. Later that year, he was dismissed from the Theater because of an ongoing dispute with singer Henriette Sontag. After that, he tried to support himself as a free-lance artist. In 1828, he took a study trip to the Baltic Sea, followed by a trip to Italy which produced hundreds of sketches that were later elaborated in his Berlin studio. He had been deeply impressed by the landscapes there and altered his entire manner of painting to reflect what he had seen.


In 1831, upon the recommendation of Karl Friedrich Schinkel, he was appointed Professor of Landscape Painting at the Berlin Academy. Despite this appointment, King Frederick William III commissioned Blechen to paint The Interior of the Palm House on the Pfaueninsel Near Potsdam, an indoor scene rather than an outdoor landscape. In 1835 he became a full member of the Academy and took a study trip to Paris. It was then that the first symptoms of his mental illness appeared.


His condition deteriorated and he suffered severe bouts of depression that forced him to take a leave of absence from the Academy in 1836. The following year, he had to be admitted to a hospital. He was able to make one final trip to Dresden, where he made his last drawings. He died four years later, in a state of total mental derangement. He was buried in the Holy Trinity Cemetery (II), but the exact location is no longer known. He is commemorated with a plaque on the cemetery wall.


A street, a park and an elementary school in Cottbus were named after him. In 2008, the school building became part of the "Blechen Carré [de]", a major shopping center. Most of his works are in private collections. He was one of the first European painters to represent early industrialization as part of his landscapes.