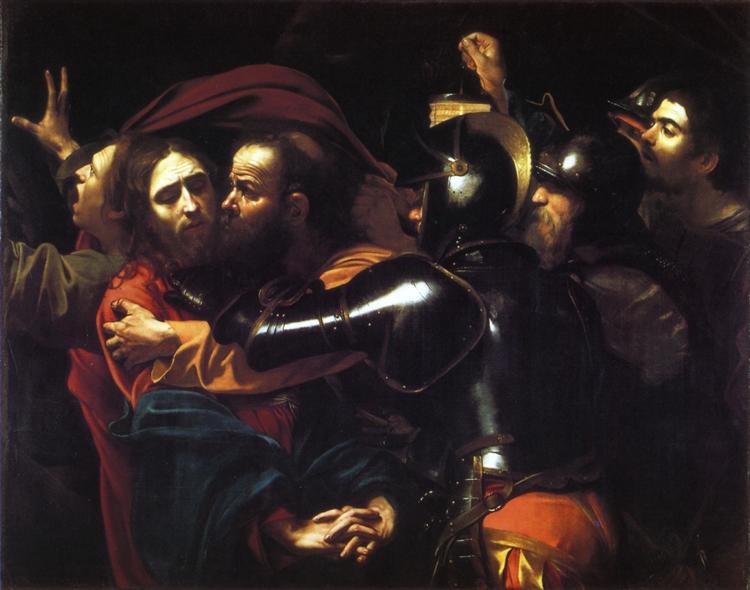 The Taking of Christ (Italian: Presa di Cristo nell'orto or Cattura di Cristo) is a painting, of the arrest of Jesus, by the Italian Baroque master Michelangelo Merisi da Caravaggio. Originally commissioned by the Roman nobleman Ciriaco Mattei in 1602, it is housed in the National Gallery of Ireland, Dublin.

There are seven figures in the painting: from left to right they are John, Jesus, Judas, three soldiers (the one farthest to the right barely visible in the rear), and a man holding a lantern to the scene. They are standing, and only the upper three-quarters of their bodies are depicted. Judas has just kissed Jesus to identify him for the soldiers. The figures are arrayed before a very dark background, in which the setting is obscured. The main light source is not evident in the painting but comes from the upper left; the lesser light source is the lantern held by the man at the right (believed to be a self-portrait of Caravaggio; also, presumably, representing St Peter, who would first betray Jesus by denying him, and then go on to bring the light of Christ to the world). At the far left, a man (St John) is fleeing; his arms are raised, his mouth is open in a gasp, his cloak is flying and being snatched back by a soldier. The flight of the terrified John contrasts with the entrance of the artist; scholars claim that Caravaggio is making the point that even a sinner one thousand years after the resurrection has a better understanding of Christ than does his friend.

Two of the more puzzling details of the painting are, one, the fact that the heads of Jesus and St. John seem to visually meld together in the upper left corner, and, two, the fact of the prominent presence, in the very center of the canvas and in the foremost plane of the picture, of the arresting officer's highly polished, metal-clad arm. Regarding the detail of the polished metal arm of the soldier in the center of the picture, Franco Mormando suggests that it was meant by the artist to serve as a mirror, a mirror of self-reflection and examination of conscience (such as in Caravaggio's Conversion of Mary Madgalene in Detroit): as do many spiritual writers and preachers of the period, the artist may be 'inviting his viewers to see themselves reflected in the behavior of Judas' through their own daily acts of betrayal of Jesus, that is, through their sin.

The central group, composed of Jesus, Judas and the soldier with an outstretched hand, resembles a 1509 woodcut by Albrecht Dürer from his Small Passion series.

By the late 18th century, the painting was thought to have disappeared, and its whereabouts remained unknown for about 200 years. In 1990, Caravaggio’s lost masterpiece was recognized in the residence of the Society of Jesus in Dublin, Ireland. The rediscovery was published in November 1993.

The painting had been hanging in the Dublin Jesuits’ dining room since the early 1930s but had long been considered a copy of the lost original by Gerard van Honthorst, also known as Gherardo delle Notti, one of Caravaggio’s Dutch followers. This erroneous attribution had already been made while the painting was in the possession of the Roman Mattei family, whose ancestor had originally commissioned it. In 1802, the Mattei sold it, as a work by Honthorst, to William Hamilton Nisbet, in whose home in Scotland it hung until 1921. Later in that decade, still unrecognised for what it was, the painting was sold to an Irish paediatrician, Marie Lea-Wilson, who eventually donated it in the 1930s to the Jesuit Fathers in Dublin, in gratitude for their support following the shooting of her husband, Capt. Percival Lea-Wilson, a District Inspector in the Royal Irish Constabulary in Gorey, County Wexford, by the Irish Republican Army on 15 June 1920.