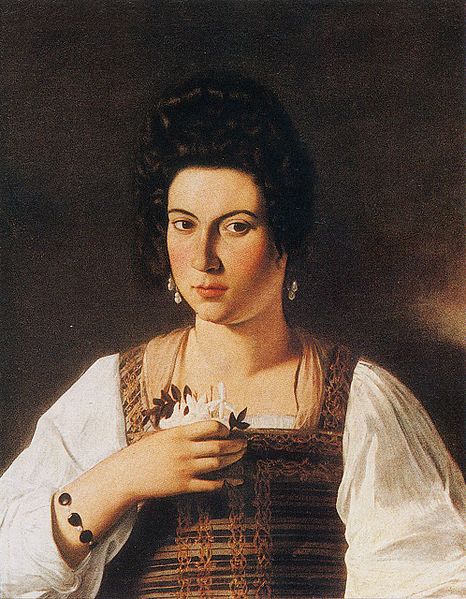 Portrait of a Courtesan

Portrait of a Courtesan (also known as Portrait of Fillide) was a painting by the Baroque master Michelangelo Merisi da Caravaggio. Painted between 1597 and 1599, it was destroyed in Berlin in 1945 and is known only from photographs. It has been suggested that the portrait represents the goddess Flora.

Fillide figured prominently in Caravaggio's work in the closing years of the 1590s, appearing as Saint Catherine, as Mary in Martha and Mary Magdalene, and as Judith in Judith Beheading Holofernes. She may have appeared even more frequently - a considerable number of Caravaggio's works are now lost - but she seems to vanish from his paintings after 1599. If sophisticated patrons such as Giustiniani represented one pole of Caravaggio's life, the world of Fillide was the other. She was one of Rome's most successful prostitutes, much sought after by the Roman elite; but she had her true existence in the streets. In February 1599 she was arrested together with a young man named Ranuccio Tomassoni, who seems to have been her pimp, (he came from a good family but was continually turning up in police records in the company of prostitutes, and not as a customer), and charged with creating a disturbance in connection with a noisy mardi gras party in her house. Fillide's friends included another prostitute, Anna Bianchini, who modelled for Caravaggio as Mary Magdalene in his Penitent Magdalene, as Martha (opposite Fillide) in Martha and Mary Magdalene, and as the Mother of Christ in Rest on the Flight into Egypt. Tomassoni would also appear again, but not in paintings: in 1606 Caravaggio killed Tomassoni in an attempt to castrate him.