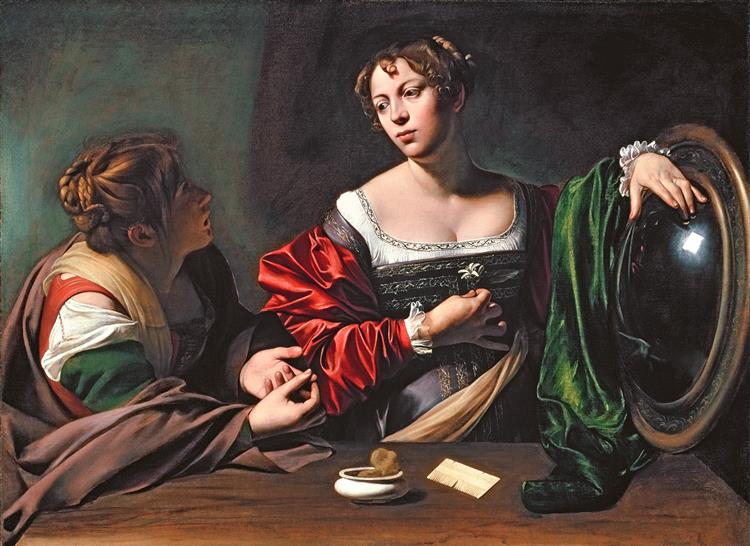 Martha and Mary Magdalene (c. 1598) is a painting by the Italian Baroque master Michelangelo Merisi da Caravaggio. It is in the Detroit Institute of Arts. Alternate titles include Martha Reproving Mary, The Conversion of the Magdalene and the Alzaga Caravaggio.

Caravaggio's Martha and Mary is dated to 1598–99, when he was in the entourage of Cardinal Francesco Maria Del Monte. Little is known of its history between those years and 25 June 1971, when its owners attempted to sell it at Christie's in London (lot 21). It remained unsold at 130,000 guineas, despite the confidence of the restorer Juan Corradini of Buenos Aires. Later converts were Benedict Nicolson and Mina Gregori (as late as January 1974). Today it is generally considered an autograph work. It was acquired by the Detroit Institute of Art in 1973.

It is thought that the painting was originally in the collection of Caravaggio's patron Ottavio Costa. His will of 6 August 1606, contains a painting by this description and states that Riggerio Tritonio, secretary of Cardinal Montalto, is to choose between the Martha and Mary and a Saint Francis; the painting not selected was to go to Costa's friend and colleague Giovanni Enriquez de Herrera. Since the Saint Francis later appears in the inventory of Tritinio, it has been assumed that the Martha and Mary passed to Herrera, probably in late 1606.

Giovanni Enriquez de Herrera died on 1 March 1610, without a will, thus leaving his four sons to decide on the fate of his possessions. It has been speculated that it remained in Rome until the 1620s, but the only firm evidence for its provenance after the Herrera family is a seal and inscriptions on the back of the original canvas with the names Niccolò Panzani, Emilia Panzani and Anna E. Panzani. This family has not been traced.

Since its rediscovery, its influence has become apparent, most notably in the number of copies, a now lost work by Carlo Saraceni and a well known version by Orazio Gentileschi, today in Munich.

The painting shows the sisters Martha and Mary from the New Testament. Martha is in the act of converting Mary from her life of pleasure to the life of virtue in Christ. Martha, her face shadowed, leans forward, passionately arguing with Mary, who twirls an orange blossom between her fingers as she holds a mirror, symbolising the vanity she is about to give up. The power of the image lies in Mary's face, caught at the moment when conversion begins.

Martha and Mary was painted while Caravaggio was living in the palazzo of his patron, Cardinal Del Monte. His paintings for Del Monte fall into two groups: the secular genre pieces such as The Musicians, The Lute Player, and Bacchus - all featuring boys and youths in somewhat claustophobic interior scenes - and religious images such as Rest on the Flight into Egypt and Ecstasy of Saint Francis. Among the religious paintings was a group of four works featuring the same two female models, together or singly. The models were two well-known courtesans who frequented the palazzi of Del Monte and other wealthy and powerful art patrons, and their names were Anna Bianchini and Fillide Melandroni. Anna Bianchini appeared first as a solitary Mary Magdalene in the Penitent Magdalene of about 1597. Fillide Melandroni appeared in a secular Portrait of a Courtesan done the same year for Del Monte's friend and fellow art-lover, the banker Vincenzo Giustiniani. In 1598 Caravaggio painted Fillide again as Saint Catherine, capturing a beauty full of intelligence and spirit. In Martha and Mary the two are shown together, Fillide perfectly fitted to the role of Mary, Anna to the mousier but insistent presence as Martha.