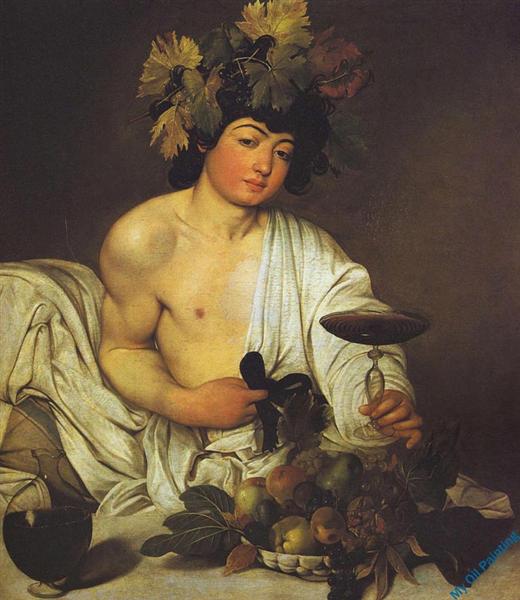 Bacchus (c. 1595) is a painting by Italian Baroque master Michelangelo Merisi da Caravaggio (1571–1610). It is held in the Uffizi Gallery, Florence.

Bacchus was painted shortly after Caravaggio joined the household of his first important patron, Cardinal Del Monte, and reflects the humanist interests of the Cardinal's educated circle. It was not in the cardinal's collection at his death, and may have been a gift to the Grand Duke in Florence. It was unknown until 1913. When it was found in a storeroom of the Uffizi Galleries, it had never been catalogued or framed.

Bacchus' offering of the wine with his left hand, despite the obvious effort this is causing the model, has led to speculation that Caravaggio used a mirror to assist himself while working from life, doing away with the need for drawing. In other words, what appears to us as the boy's left hand was actually his right. This would accord with the comment by Caravaggio's early biographer, the artist Giovanni Baglione, that Caravaggio did some early paintings using a mirror. English artist David Hockney made Caravaggio's working methods a central feature of his thesis (known as the Hockney-Falco thesis) that Renaissance and later artists used some form of camera lucida. The model for Bacchus might have been Caravaggio's friend Mario Minniti, whom he had used before in The Musicians.

It was discovered upon closer investigation that Caravaggio included a miniature self-portrait of himself painting the subject in the reflection of the offered glass.