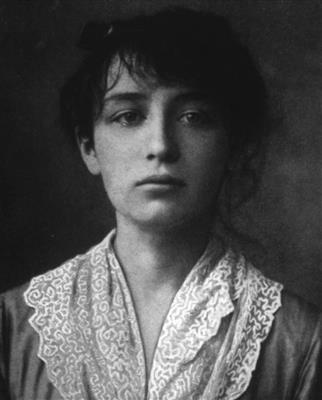 Camille Claudel (French pronunciation: [kamij klɔdɛl] (listen); 8 December 1864 – 19 October 1943) was a French sculptor. Although she died in relative obscurity, Claudel has gained recognition for the originality and quality of her work. She was the elder sister of the poet and diplomat Paul Claudel and the co-worker and lover of sculptor Auguste Rodin.


The national Camille Claudel Museum in Nogent-sur-Seine opened in 2017, and the Musée Rodin in Paris has a room dedicated to Claudel's works.


Camille Claudel was born in Fère-en-Tardenois, Aisne, in northern France, the second child of a family of farmers and gentry. Her father, Louis-Prosper Claudel, dealt in mortgages and bank transactions. Her mother, the former Louise-Athanaïse Cécile Cerveaux, came from a Champagne family of Catholic farmers and priests. The family moved to Villeneuve-sur-Fère while Camille was still a baby. Her younger brother Paul Claudel was born there in 1868. Subsequently, they moved to Bar-le-Duc (1870), Nogent-sur-Seine (1876), and Wassy-sur-Blaise (1879), although they continued to spend summers in Villeneuve-sur-Fère, and the stark landscape of that region made a deep impression on the children.


Camille moved with her mother, brother, and younger sister to the Montparnasse area of Paris in 1881. Her father remained behind, working to support them.


Claudel was fascinated with stone and soil as a child, and as a young woman she studied at the Académie Colarossi, one of the few places open to female students. She studied with sculptor Alfred Boucher. (At the time, the École des Beaux-Arts barred women from enrolling to study.)


In 1882, Claudel rented a workshop with other young women, mostly English, including Jessie Lipscomb. Alfred Boucher had become her mentor, and he also provided inspiration and encouragement to the next generation of sculptors such as Laure Coutan. Claudel was depicted by Boucher in Camille Claudel lisant, and later she sculpted a bust of her mentor.


After teaching Claudel and the other sculptors for over three years, Boucher moved to Florence. Before he left he asked Auguste Rodin to take over the instruction of his pupils. Rodin and Claudel met, and their artistic association and tumultuous and passionate relationship soon began.


Claudel started working in Rodin's workshop around 1884, and became a source of inspiration for him. She acted as his model, his confidante, and his lover. She never lived with Rodin, who was reluctant to end his 20-year relationship with Rose Beuret.


Knowledge of the affair agitated her family, especially her mother, who already detested her for not being a boy and never agreed with Claudel's involvement in the arts. As a consequence, Claudel left the family home.


In 1892, after an abortion, Claudel ended the intimate aspect of her relationship with Rodin, although they saw each other regularly until 1898.


Le Cornec and Pollock state that after the sculptors' physical relationship ended, because of gender-based censorship and the sexual element of Claudel's work she could not get the funding to get many of her daring ideas realized. Claudel thus had to either depend on Rodin to realize them, or to collaborate with him and let him get the credit as the lionized figure of French sculptures. She also depended on him financially, especially since her loving and wealthy father's death. This allowed her mother and brother, who were suspicious of her lifestyle, to keep the money and let her wander around the streets dressed in beggars' clothes.