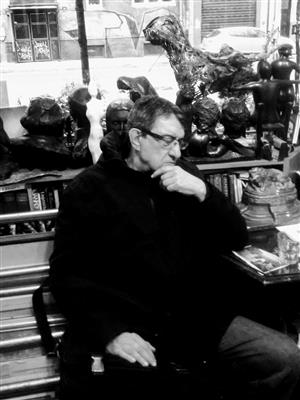 Branko Bačanović graduated from the Academy of Fine Arts of Bosnia and Herzegovina, majoring in graphic design, in 1977. He acted as the chairman of the Association of visual artists of applied arts of Bosnia and Herzegovina (ULUPUBiH) from 1988 to 1990. He exhibited at many solo and selective exhibitions in BiH and abroad (USA, Russia, Canada, Mexico, Poland, Finland, France, Belgium, Cuba, Bulgaria, Germany, Slovakia, Algeria, Japan, Croatia, Serbia, Montenegro, Slovenia, and more).

Bačanović tried his hand at all forms of graphic design: the full visual identity of events and companies, a system of visualization in interior and exterior, design of books and monographs, and various illustrations. His narrow specialization is the poster in culture, and he is also outstanding for introducing, in BiH theatres, the treatment of theatre posters as part of the play. Bačanović authored posters for cult movies of Bosnian and Herzegovinian and Yugoslav cinematography “Do You Remember Dolly Bell” and “When Father Was Away on Business”, and he also visually refined
Dubravko Lovrenović’s cult monograph “Stećci” (Medieval Bosnian tombstones), as few other books, contributed to the proper scientific understanding of our past.

Branko Bačanović is certainly one of the most significant artists in the area of graphic design, both in Bosnia and Herzegovina and former Yugoslavia and across the world, due to the fact that his work has been recognized and appreciated at many international selective exhibitions, and that he was the only representative of BiH and ex-Yugoslav graphic design on a number of occasions.
He is an artist whose work is not limited only to graphic design, an artist that imbues it with elements of other arts, and imbues other arts, from film and theatre to valuable literary and scientific pieces, with the fruit of such work. His work has been discussed by well-known art critics, art historians, theatre artists… and numerous awards from the very beginning of his artistic career to this day illustrate the value of his work. Bačanović’s oeuvre is also a distinctive historical testimony of the time when theatre, book, and film were advertised; actually, it is the top quality of this area of advertising. At the same time, his oeuvre is a document of the milieu where artists, including Bačanović himself, worked.