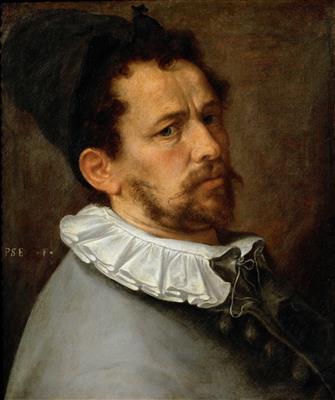 Bartholomeus Spranger or Bartholomaeus Spranger (21 March 1546 in Antwerp – 1611 in Prague) was a Flemish painter, draughtsman, sculptor and designer of prints. Working in Prague as a court artist for the Holy Roman emperor Rudolf II, he responded to his patron's aesthetic preferences by developing a version of the extreme style, full of conceits, which has become known as Northern Mannerism. This style stressed sensuality, which was expressed in smoothly modeled, elongated figures arranged in elegant poses, often including a nude woman seen from behind. Spranger's unique style combining elements of Netherlandish painting and Italian influences, in particular the Roman Mannerists, had an important influence on other artists in Prague and beyond as his paintings were disseminated widely through prints.


Bartholomeus Spranger was born in Antwerp as the third son of Ioachim Spranger and Anna Roelandtsinne. His father was a trader who had spent time abroad including a long stint in Rome. Showing a keen interest in drawing, he was first apprenticed with Jan Mandijn, where he stayed for 18 months. Upon the death of Mandijn, Spranger studied for some time with Frans Mostaert who died after only a few weeks. He finally studied wwth with Cornelis van Dalem for two years after which he stayed on for another two years in the workshop of van Dalem. As his three masters were mainly known as landscape painters. Spranger further copied prints of Frans Floris and Parmigianino. He traveled to Paris on 1 March 1565 where he worked for six weeks in the workshop of Marc Duval. He then travelled on to Italy, where he first stayed for eight months in Milan. He then worked for three months in Parma as an assistant to Bernardino Gatti on the painting of the dome of the Santa Maria della Steccata.


He worked on wall paintings in various churches. In Rome he became, like El Greco, a protégé of Giulio Clovio. Here he also met Karel van Mander who later included a biography of Spranger in his Schilder-boeck, first published in 1604 and containing, amongst others, biographies of important Netherlandish painters. Pope Pius V appointed him court painter in 1570. He was summoned to Vienna by Maximilian II, Holy Roman Emperor, who died soon after his arrival in 1576.


Maximilian II's successor Rudolf II was even more keen to employ him, and in 1581 he was appointed court painter and also valet de chambre, the court having moved its seat to Prague, where he stayed until his death there in 1611, shortly before Rudolf was deposed. Spranger occupied a house just outside the castle walls. The artist developed a close personal relationship with Rudolf and the two spent many days together engaged in conversation. The emperor would regularly visit Spranger's studio. The emperor bestowed on Spranger the coat of arms of a liegeman in 1588 and granted him a hereditary title in 1595. In the meantime, Spranger supplied the emperor with a continuous stream of paintings of mythological scenes with nudes drawn from nature as well as propaganda pieces which extolled the virtues of Rudolf as a ruler. An example of a work combining the two elements of eroticism and propaganda is the Allegory of the virtues of Rudolf II (Kunsthistorisches Museum) which shows Bellona (the Roman goddess of war) sitting on a globe surrounded by Venus, Amor, Athene and Baccus and emblems symbolising Hungary and the Croatian river Sava. The propagandic message is that the empire is safe with Rudolf at the helm. Thanks to the emperor's patronage, Spranger became very wealthy and owned many properties by the time he died.