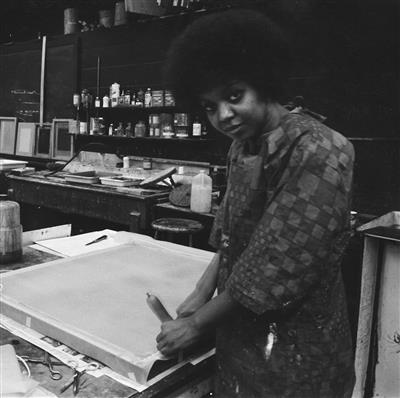 Barbara Jones-Hogu (April 17, 1938 – November 14, 2017) was an African-American artist best known for her work with the Organization of Black American Culture (OBAC) and for co-founding the artists' collective AfriCOBRA.


Barbara Jones-Hogu was born in Chicago, Illinois, in 1938. She received a Bachelor of Arts degree from Howard University and a Bachelor of Fine Arts degree from the School of the Art Institute of Chicago. She earned a Master of Fine Arts degree from the Institute of Design in Chicago, as well as a master's degree in printing from the Illinois Institute of Technology, Chicago. She later pursued a Master of Fine Arts in Independent Film and Digital Imaging at Governors State University while in her early seventies. She wished to earn the degree to document artists and their work. She was described as very private and thoughtful. She had one son, Kuumba Hogu, who remarked that he wanted his mother to be remembered through her artwork.


Jones-Hogu was a member of the Organization of Black American Culture (OBAC), and contributed when they completed the mural Wall of Respect in 1967. It is regarded as the first collective street mural in the United States. She completed the actors' section. Jones-Hogu became involved in printing while studying at The Art Institute of Chicago. Her major in Painting included courses in printmaking, and she discovered that she enjoyed it while taking the coursework for her major. She was working while going to school. She also was able to use printmaking facilities at the Institute of Design. Misch Kohn, the head of printmaking at the time, gave her a key to the printmaking facilities so that she could complete printmaking work there whenever she wanted, usually on evenings and weekends.


In 1968, Jones-Hogu co-founded AfriCOBRA, a collective of African-American artists based in Chicago. One of her most famous works while involved with the group was "Unite", which has been featured in many exhibitions, including at the Tate Modern in London. The work was inspired by a sculpture by Elizabeth Catlett, which she saw while visiting Catlett in Mexico in the summer of 1968. It was also inspired by the 1968 Olympics Black Power salute. She later remarked: " I thought we, as a people should unite as a people under this concept." The prints of "Unite" that she made prior to joining AfriCOBRA were differentiated from the prints she made while in AfriCOBRA by an African sculpture — the prints that she had done previously did not have an African sculpture, and instead had an African head. She created the work "Resist Law and Order in a Sick Society" due to these events. Many of her works incorporate key phrases as titles.


Jones-Hogu also created a work entitled "Stop Genocide." The work was based on gangs, which she thought could be used as a force for good if they came together. However, she felt that the gangs were engaging in "self-genocide" instead of aiming to stop genocide, which she defined as "[w]hite on black genocide and crime." She printed this work on Japanese handmade paper, instead of her usual paper that she used for AfriCOBRA prints. The latter paper started to become fragile over the years, prompting her to switch. She printed at the Illinois Institute of Technology, as she did not have a studio at the time. She produced many works with the flag for her thesis at the Illinois Institute of Technology. During this time, she also was filmed for a portion of the documentary Medium Cool, but her parts were not used. Jones-Hogu said that makers of the documentary wished to ask young "radical" African-Americans about the potential turmoil in Chicago during the 1968 Democratic National Convention. She remembered that she spoke on "the racial and the political attitudes and conditions in the city".