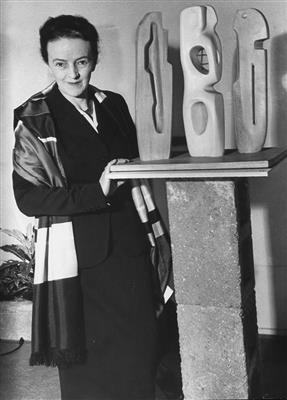 Dame Jocelyn Barbara Hepworth DBE (10 January 1903 – 20 May 1975) was an English artist and sculptor. Her work exemplifies Modernism and in particular modern sculpture. Along with artists such as Ben Nicholson and Naum Gabo, Hepworth was a leading figure in the colony of artists who resided in St Ives during the First and Second World Wars.


Jocelyn Barbara Hepworth was born on 10 January 1903 in Wakefield, West Riding of Yorkshire, the eldest child of Gertrude and Herbert Hepworth. Her father was a civil engineer for the West Riding County Council, who in 1921 advanced to the role of County Surveyor. Hepworth attended Wakefield Girls' High School, where she was awarded music prizes at the age of 12 and won a scholarship to study at the Leeds School of Art from 1920. It was there that she met her fellow Yorkshireman, Henry Moore. They became friends and established a friendly rivalry that lasted professionally for many years.


Following her studies at the RCA, Hepworth travelled to Florence, Italy, in 1924 on a West Riding Travel Scholarship. Hepworth was also the runner-up for the Prix-de-Rome, which the sculptor John Skeaping won. After travelling with him to Siena and Rome, Hepworth married Skeaping on 13 May 1925 in Florence. In Italy, Hepworth learned how to carve marble from sculptor Giovanni Ardini. Hepworth and Skeaping returned to London in 1926, where they exhibited their works together from their flat. Their son Paul was born in London in 1929. In 1931, Hepworth met and fell in love with abstract painter Ben Nicholson; however, both were still married at the time. At Hepworth's request, she and Skeaping were divorced that year.


Her early work was highly interested in abstraction and art movements on the continent. In 1931, Hepworth was the first to sculpt the pierced figures that are characteristic of both her own work and, later, that of Henry Moore. They would lead in the path to modernism in sculpture. In 1933, Hepworth travelled with Nicholson to France, where they visited the studios of Jean Arp, Pablo Picasso, and Constantin Brâncuși. Hepworth later became involved with the Paris-based art movement, Abstraction-Création. In 1933, Hepworth co-founded the Unit One art movement with Nicholson and Paul Nash, the critic Herbert Read, and the architect Wells Coates. The movement sought to unite Surrealism and abstraction in British art.


Hepworth also helped raise awareness of continental artists amongst the British public. In 1937, she designed the layout for Circle: An International Survey of Constructivist Art, a 300-page book that surveyed Constructivist artists and that was published in London and edited by Nicholson, Naum Gabo, and Leslie Martin.


Hepworth, with Nicholson, gave birth to triplets in 1934: Rachel, Sarah, and Simon. Hepworth, atypically, found a way to both take care of her children and continue producing her art. "A woman artist", she argued, "is not deprived by cooking and having children, nor by nursing children with measles (even in triplicate) – one is in fact nourished by this rich life, provided one always does some work each day; even a single half hour, so that the images grow in one's mind." Hepworth married Nicholson on 17 November 1938 at Hampstead Register Office in north London, following his divorce from his wife Winifred. Rachel and Simon also became artists.