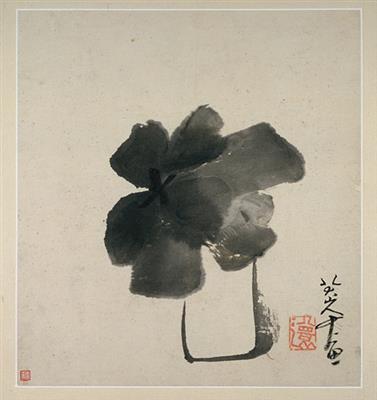 Bada Shanren (八大山人; born Zhu Da, 朱耷) was a Chinese painter of shuimohua and a calligrapher. He was of noble lineage, being a descendant of the Ming dynasty prince Zhu Quan. Art historians have named him as a leading painter of the period.

Bada Shanren (born Zhu Da ca. 1626—1705) was a Han Chinese painter of ink wash painting and a calligrapher. He was of royal descent, being a direct offspring of the Ming dynasty prince Zhu Quan who had a feudal establishment in Nanchang. His master lineage's accession was revoked following the last Ning Lineage King Zhu Chenhao's rebellion in 1521, but the rest of the lineage was allowed to retain status in Jiangxi. Art historians have named him as a brilliant painter of the period.

Bada Shanren, a purported child prodigy born to a handicapped father, began painting and writing poetry in his early childhood. About the year 1644, when the Ming emperor committed suicide and the Manchu army from the north attacked Beijing, the young Han Chinese man sought refuge in a vihara. Because he was a Ming prince, the dynastic upheaval created a great amount of uncertainty for his position in society. As years passed and the Manchurian court became more firmly established, there was less and less insecurity among the Qing regime about remaining Ming loyalties and possible future rebellions. Due to these more stable circumstances, after 40 years, Bada Shanren deemed it acceptable to leave the monastery and to re-enter day-to-day life among society. In the aftermath of a nervous breakdown that could have been staged to avoid retribution for his family background, Zhu Da abandoned his monastic life and developed a career as a professional painter, adopting a series of descriptive pseudonyms, most notably Bada Shanren by which he is most often known today. He is said to have screamed and made weird sounds while painting. The stylized vertical writing of his pseudonym Bada Shanren (八大山人) looks like the characters for laugh (笑) and cry (哭), thus by signing his paintings he implied his confusion and feelings of grief for the fate of his country and home.

His paintings feature sharp brush strokes which are attributed to the sideways manner by which he held his brush. In the 1930s, Chinese painter Zhang Daqian produced several forgeries of Bada Shanren's works but they are easily spotted by the trained eye, because the modern copies were softer and rounder. Yale University scholar Fred Fangyu Wang was a major collector of Bada Shanren paintings from the 1960s until his death in 1997.