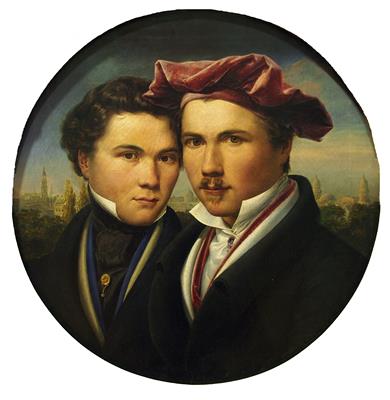 
Ahlborn was born in Hanover, son of the Hanoverian master tailor Heinrich Christian Ahlborn and Dorothea Elisabeth Röllecke. He entered the Prussian Academy of Arts (Berlin) in 1819, where he studied with Karl Wilhelm Wach. In 1826 he received the Academy Award for a portrait of the New Palace in Potsdam, and used the money to travel to Italy in 1827, where he was one of the founders of the Roman Kunstverein. In this period, he lived in Rome, Florence, and Ascoli. In December 1832, he married Therese, the daughter of a government official, in Berlin. In 1833 he became a member of the Prussian Academy. In Italy, Ahlborn and his wife converted to Roman Catholicism from Lutheranism, on August 15, 1837. His paintings are mainly of Italian, North German, and Tyrolean landscapes, but also including a few portraits and religious works. Many of his works were in the possession of the royal family of Prussia. Ahlborn died in Rome in 1857.