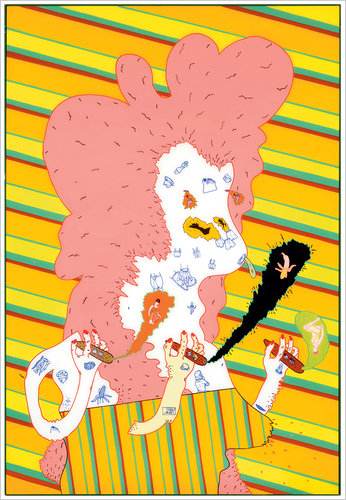 Funk art is an American art movement that was a reaction against the nonobjectivity of abstract expressionism. An anti-establishment movement, Funk art brought figuration back as subject matter in painting again rather than limiting itself to the non-figurative, abstract forms that abstract expressionists such as Jackson Pollock and Mark Rothko were depicting. The movement’s name was derived from the jazz musical term "funky", describing the passionate, sensuous, and quirky. During the 1920s, jazz was thought of as very basic, unsophisticated music, and many people believed Funk was an unrefined style of art as well. The term funk also had negative connotations because the word had an association with a foul odor. Throughout the 1960s and 1970s, Funk was a popular art form, mainly in California's Bay Area in the United States. Although discussed as a cohesive movement, Funk artists did not feel as if they belonged to a collective art style or group. This is because while its artists shared the same attitudes and created similar works, they were not necessarily working together.

The Funk art movement was a regional art movement, most predominant in Northern California. Some notable cities where the Funk movement was concentrated in consisted of Berkeley, Marin County, Big Sur, and North Beach. Many Funk artists began as Bay Area Figurative Movement painters in the 1950s. The movement originated from the bohemian underground in the Bay Area. During the 1960s, the Bay Area, specifically San Francisco, was a free and spiritual environment due to its beatnik art culture and the youth political activism reacting against the Vietnam War going on at the time. A variety of different cultures existed in the city, including poetry, jazz, and art. The freedom of thinking and culture was one of the main reasons that Funk art, a combination of both painting and sculpture, could develop and prosper in the Bay Area.

The Funk art that occurred throughout Northern California was the exact opposite of the "Fetish Finish" sculptures made in Southern California and the "primary structures" constructed in New York at the time. Funk art in the Bay Area was unique and not similar to any other movement of the 1960s. Jess, Wally Hedrick, Jay DeFeo, Viola Frey, Wallace Berman and Bruce Conner were notable Funk artists who emerged from the Bay Area. Jess was one of the earliest and most influential Funk artists. In 1967, Peter Selz, the first director of the University of Art Museum in Berkeley, California, organized a Funk Show there. Selz wanted to showcase the strange mindset in California through an array of Funk pieces. The exhibition featured works from Peter Voulkos, Mowry Baden and Bruce Conner, and it brought national recognition to the movement for the first time. Before this show, not many people outside of the Bay Area had seen or heard of Funk works, which relieved artists of pressures to become successful.

The characteristics and techniques of Funk art works were more important than the subject matter.

Unlike earlier movements, such as Dada and Surrealism, Funk art was not concerned with public morality. Its artists were committed to identifying with their works on a personal level instead of the social or existential. Through their absurdist works, Funk artists demonstrated personal feelings, emotions and processes and in this way their work had a closer relationship to nature rather than to culture. The works had creative freedom and demonstrated the artists' lives, personalities and experiences. Funk artists treated their work with a sense of humor, senselessness, confrontation, vulgar sexuality and autobiographical references. In their pieces, Funk artists are sometimes self-deprecating and ironic. Although the works are humorous, they sometimes cover a more serious undertone. Since there was no clear meaning in many pieces, Funk art contains a sense of ambiguity.