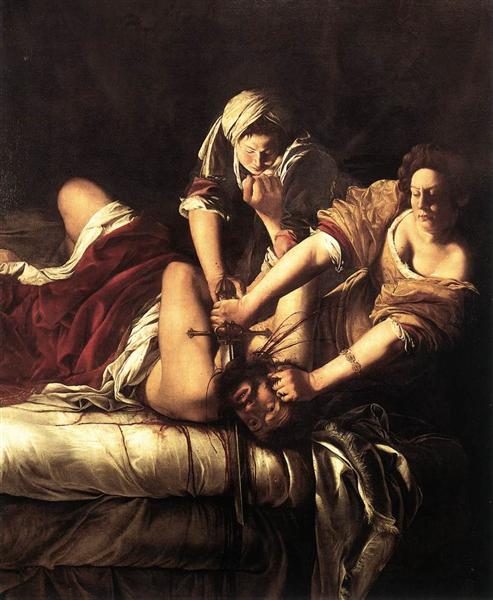 Judith Slaying Holofernes is a painting by the Italian early Baroque artist Artemisia Gentileschi completed between 1614–20. The work shows the scene of Judith beheading Holofernes, common in art since the early Renaissance, as part of the group of subjects called the Power of women, which show women triumphing over powerful men. The subject takes an episode from the apocryphal Book of Judith in the Old Testament, which recounts the assassination of the Assyrian general Holofernes by the Israelite heroine Judith. The painting shows the moment when Judith, helped by her maidservant, beheads the general after he has fallen asleep drunk.

The painting is relentlessly physical, from the wide spurts of blood to the energy of the two women as they perform the act. The effort of the women's struggle is most finely represented by the delicate face of the maid, who is younger than in most paintings, which is grasped by the oversized, muscular fist of Holofernes as he desperately struggles to survive. Although the painting depicts a classic scene from the Bible, Gentileschi drew herself as Judith and her mentor Agostino Tassi, who was tried in court for her rape, as Holofernes. Gentileschi's biographer Mary Garrard famously proposed an autobiographical reading of the painting, stating that it functions as "a cathartic expression of the artist's private, and perhaps repressed, rage."

Gentileschi painted two versions of this work: the first is at the Museo Nazionale di Capodimonte in Naples, and the second is at the Uffizi Gallery in Florence.

Gentileschi's self-insertion was reversed in an influential composition by Cristofano Allori (c. 1613 onwards), which exists in several versions and copied a conceit of Caravaggio's recent David with the Head of Goliath; here the head is a portrait of the artist, Judith his ex-mistress, and the maid her mother.

Gentileschi painted another painting, Judith and her Maidservant (1613–14), which shows Judith holding a dagger while her maidservant carries a basket containing a severed head. Judith and her Maidservant, is displayed in the Palazzo Pitti, in Florence. A further three paintings by Gentileschi, in Naples, Detroit and Cannes, show her maid covering the head of Holofernes, while Judith herself looks out the frame of the picture.

Judith beheading Holofernes has been depicted by a number of artists including Giorgione, Titian, Rembrandt, Peter Paul Rubens and Caravaggio.

Caravaggio's Judith Beheading Holofernes is believed to be the main source of this work, and his influence shows in the naturalism and violence Gentileschi brings to her canvas. In both there is a notable absence of decorative detail in the background. Gentileschi's father was a famous painter; he was also very much influenced by Caravaggio's style and painted his own version of Judith slaying Holofernes.