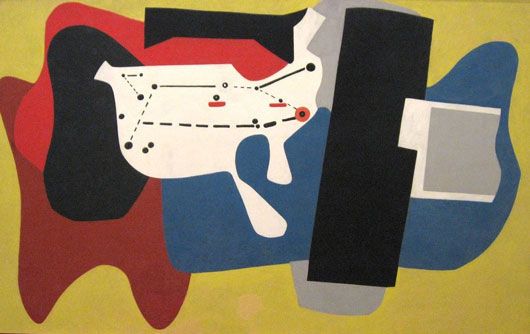 Arshile Gorky’s ten-panel mural Aviation: Evolution of Forms under Aerodynamic Limitations (1937) created for the Newark Airport in New Jersey tells a fascinating story of the collision of art and politics. Gorky designed and executed the mural as part of the WPA Federal Art Project, a New Deal program that supported artists during the Great Depression. He joined the Federal Art Project in 1935, where he was commissioned to work as a muralist. Gorky was highly regarded by several people in the organization, who appreciated and supported his abstract style.

Initially, Gorky created a design for the Floyd Bennett Airfield in New York City. He found objects in the airfield, which were then photographed by Wyatt Davis, the brother of American painter Stuart Davis. Gorky used the photographs as sources for his drawings and studies in gouache. In some cases, he created collages that incorporated cutouts of the photographs into the drawn designs. In the collages, Gorky disassociated the different parts of the airplane into basic shapes that reflected their function. His designs were inspired by European modernism: the language of Synthetic Cubism prominent in the art of Pablo Picasso and Georges Braque as well as the mural paintings of Fernand Léger who argued that pure colors and geometric forms were meant for walls and large surfaces rather than easel paintings. Like Léger in Peinture murale (Mural Painting) (1924), Gorky’s palette centered on primary colors. Additionally, these colors corresponded to the colors painted on the machinery and the graphic signs on the airplanes.

In late 1935, Gorky presented his mural design for the Floyd Bennett Airfield to New York Mayor La Guardia at an exhibition held at the Federal Art Gallery. He explained how he aimed to show the object simultaneously from all sides and how his abstract style was in tune with contemporary life. Even though La Guardia did not critique Gorky directly, he made comments that showed his disdain for abstract art. In subsequent reports, the press published La Guardia’s comments, presenting them as criticisms of Gorky. Ultimately, the Floyd Bennett project was assigned to a competitor who submitted a figurative design, but Gorky was transferred to a more prominent project, the mural at Newark Airport. Gorky’s original design was for one large panel, so the artist made appropriate adjustments to accommodate the new space in Newark - a total of ten panels.

The Newark mural was one of the highlights of Gorky’s career; besides, but it was more than a personal accomplishment. Gorky was a champion of abstract art, and this mural was an artistic statement. Aviation: Evolution of Forms under Aerodynamic Limitations was the most massive abstract mural executed within the Federal Art Project, and offered a unique opportunity to create an abstract artwork that would engage with the broad public. The panels were mounted in June 1937, but they were displaced during World War II when the airport was under the control of the Air Force. The missing murals were discovered in the 1970s and were first presented to the public in the winter of 1978-1979.