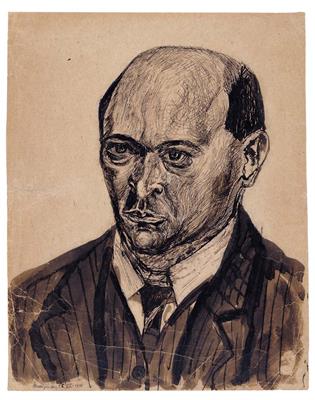 Arnold Schoenberg or Schönberg (/ˈʃɜːrnbɜːrɡ/, US also /ˈʃoʊn-/; German: [ˈʃøːnbɛɐ̯k] (listen); 13 September 1874 – 13 July 1951) was an Austrian-born composer, music theorist, teacher, writer, and painter. He is widely considered one of the most influential composers of the 20th century. He was associated with the expressionist movement in German poetry and art, and leader of the Second Viennese School. As a Jewish composer, Schoenberg was targeted by the Nazi Party, which labeled his works as degenerate music and forbade them from being published. He emigrated to the United States in 1933, becoming an American citizen in 1941.


Schoenberg's approach, bοth in terms of harmony and development, has shaped much of the 20th-century musical thought. Many European and American composers from at least three generations have consciously extended his thinking, whereas others have passionately reacted against it.


Schoenberg was known early in his career for simultaneously extending the traditionally opposed German Romantic styles of Brahms and Wagner. Later, his name would come to personify innovations in atonality (although Schoenberg himself detested that term) that would become the most polemical feature of 20th-century art music. In the 1920s, Schoenberg developed the twelve-tone technique, an influential compositional method of manipulating an ordered series of all twelve notes in the chromatic scale. He also coined the term developing variation and was the first modern composer to embrace ways of developing motifs without resorting to the dominance of a centralized melodic idea.


Schoenberg's archival legacy is collected at the Arnold Schönberg Center in Vienna.


Arnold Schoenberg was born into a lower middle-class Jewish family in the Leopoldstadt district (in earlier times a Jewish ghetto) of Vienna, at "Obere Donaustraße 5". His father Samuel, a native of Szécsény, Hungary., later moved to Pozsony (Pressburg, at that time part of the Kingdom of Hungary, now Bratislava, Slovakia) and then to Vienna, was a shoe-shopkeeper, and his mother Pauline Schoenberg (née Nachod), a native of Prague, was a piano teacher. Arnold was largely self-taught. He took only counterpoint lessons with the composer Alexander Zemlinsky, who was to become his first brother-in-law.


In his twenties, Schoenberg earned a living by orchestrating operettas, while composing his own works, such as the string sextet Verklärte Nacht ("Transfigured Night") (1899). He later made an orchestral version of this, which became one of his most popular pieces. Both Richard Strauss and Gustav Mahler recognized Schoenberg's significance as a composer; Strauss when he encountered Schoenberg's Gurre-Lieder, and Mahler after hearing several of Schoenberg's early works.