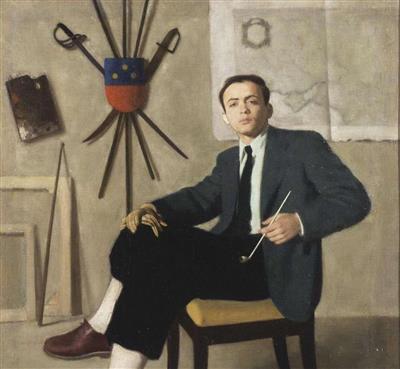 Antonio Bueno (21 July 1918 – 26 September 1984) was an Italian painter of Spanish origin, who acquired Italian citizenship in 1970. He was born in Berlin while his journalist father was posted there by the newspaper ABC of Madrid.


Bueno undertook art studies in Spain and Switzerland. In 1937 he was in Paris, where he exhibited at the Salon des Jeunes; then in 1940 with his brother Xavier, he moved to Italy. After a post-impressionist experience, immediately after World War II he joined the school of Armenian artist Gregorio Sciltian, painting trompe-l'oeil work. With Pietro Annigoni and his own brother, Bueno took part in the "Pittori moderni della Realtà (Modern Painters of Reality)" group . A dynamic and restless experimenter, after these experiences he conducted in-depth research in genres: abstract painter in 1950–53 while working as secretary for the Numero magazine; neometaphysic painter with his clay pipe series in 1953–57; verist; materiologic as a follower of Informale with a number of imprint forms in 1960–62; signaletic and pop in the middle of the 1960s; neodada and visual painter – all this as an eternal combinative play of subjects and materials.


Bueno's final affirmation occurred at the Biennale di Venezia of 1984, a few months before his death, when he was already gravely ill: he exhibited a series of magistral work that was highly acclaimed and undoubtedly represents the apex of his whole production.