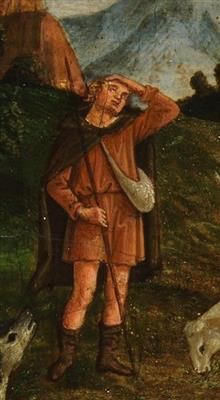 
Antoniazzo was born in the Colonna rione of Rome.


He was influenced at first by the decorative manner of Benozzo Gozzoli and Beato Angelico, as well as by the local painters of Lazio. His first recorded work is from 1461, a replica (untraced) of the miraculous Virgin and Child of St. Luke in the Basilica of Santa Maria Maggiore of Rome, for the seignior of Pesaro, Alessandro Sforza.


From 1464 he worked for the papal court, producing at first a triptych of the Virgin and Child with Saints in Rieti. In 1467 he completed the decoration of the funerary chapel of Cardinal Bessarion in the church of Santi Apostoli, located not far from the house where he was born. In the centre of the decoration was an icon of the Virgin, now in the Chapel of St Anthony, a copy of the Byzantine icon in the Santa Maria in Cosmedin, the church of the Greeks in Rome. This icon in the Santi Apostoli is one of the most remarkable examples of Antoniazzo's considerable production of Virgins, generally taken from Byzantine models: he was indeed a much sought-after copier of icons. Later he worked to a series of frescoes in the Monastery of Tor de' Specchi in Rome, featuring stories of the life of S. Francesca Romana, and to the decoration of the public rooms of the Palazzo Venezia.


In the 1470s Antoniazzo worked to the decoration of the Vatican Palace with artists like Perugino, Melozzo da Forlì and Ghirlandaio. Through their influence his figures acquired gentler expressions and their garments were ornamented with decorative patterns, though always retaining several Medieval features.


In Santa Maria sopra Minerva he painted for that church a famous Annunciation (1500). The painting shows the Dominican Cardinal Juan de Torquemada (d. 1468) presenting poor girls dowered by the guild of the Annunciation. The Cardinal Torquemada founded this guild, which was dedicated to the Virgin Mary.


In the years between 1475 and 1480 Antoniazzo's production of altarpieces and panels with images of the Virgin increased as a result of the encouragement of the cult of the Virgin by Pope Sixtus IV. His later works show an increasing mannerism in their features, which were later imitated by several painters, whose works had been often attributed to the master.


Antoniazzo was one of the three founders of the Accademia di San Luca, the guild of painters and illuminators in Rome, and signed the statutes in 1478.


A portion of his Madonna and Child with Donor from the Houston, Texas Museum of Fine Arts was chosen as the art masterpiece United States Postal Service's Christmas stamp for 1991.