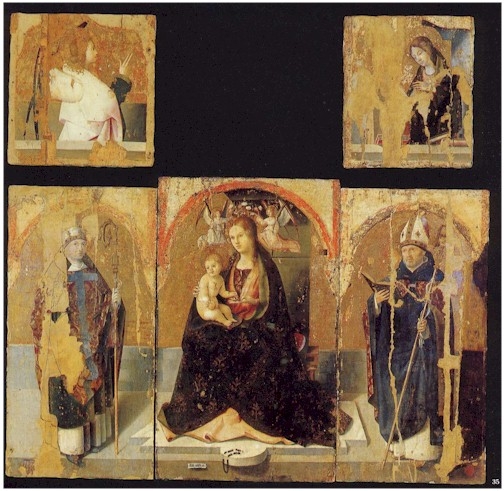 San Gregorio Polyptych is a polyptych painting by the Italian Renaissance master Antonello da Messina, completed in 1473 and housed in the Regional Museum of Messina, southern Italy.

The polyptych is signed in the cartouche visible on the step in the central panel. It was commissioned for the convent annexed to the church of Santa Maria extra moenia in Messina, also called San Gregorio, whence its modern name. The panels were originally connected by a carved frame in Neo-Gothic style, which was likely removed from as early as the 16th century.

The work is in poor state. One of the panel was removed in the 16th century or later, and in 1842 there was a drastic restoration of what remained. In 1908, the former convent where the work was destroyed by the 1908 Messina earthquake, leaving its art pieces exposed to the rain which fell in the following days. In that occasion, large parts of the Madonna's mantle and of St. Gregory went lost.

Recovery interventions began in 1912, under the direction of Luigi Cavenaghi. This regarded, in particular, the side panels, including a restoration of lost parts basing on existing photographs (such as one of St. Gregory's hands). A new restoration was carried on in 1940-1942 by the Istituto Centrale del Restauro of Rome, followed by another (Angel of Annunciation panel) in 1981. In 2005-2006 there was a complete check of the polyptych, when it was exhibited at the Quirinal Palace. Some details, which had been covered by later repaintings and restorations, were recovered: they include the original decoration with vegetable motifs of Mary's mantle (originally completed by a gilt decoration, now lost).

Five of the original panels in the polyptych, on two levels, survive. The lower level shows, at the center, the Madonna of the Rosary Enthroned, flanked by St. Gregory the Great at left and St. Benedict at right. The upper level depicts an Angel of Annunciation and the Annunciation, while a central panel, perhaps a Dead Christ Supported by Angels or a Deposition from the Cross, is lost.

The general layout of the polyptych is rather traditional, such as the presence of gilt background. However, there is a series of more modern details which show Antonello's attention to novelties he saw or learn from the rest of Italy. These include the spatial unification of the panels (as in the steps at the base of the throne, which continue to the side panels), the use of tempera grassa derived from Netherlandish and Catalan artists working in the Kingdom of Naples, as well as the psychological characterization of the characters.

The polyptych was likely placed on a side wall, as testified by the observation angle, which is from right, and the tapestry behind the throne, which is not at the center. The upper level is instead optimized for view from below. There are also trompe-l'oeil details, such as the saints' feet which apparently jut out from the step's edge, inspired by spatial innovations by northern Italian painters such as Andrea Mantegna. Also typical of northern European art was the attention to smaller details, including the pearls in Benedict's mitre, the brilliant cherries that the Child takes from his mother's wife, or the pearls in the rosary at the Virgin's feet.